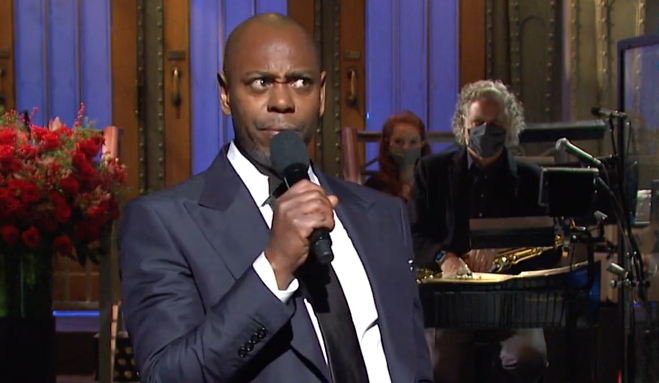 Dave Chappelle is once again expressing defiance after briefly bending to the criticism he received for mocking trans people in his latest Netflix special, resulting in several LGBTQ and civil rights groups issues statements and an employee walkout at Netflix.

After a rep for the comic told TMZ last week, “Dave stands by his art: No more jokes about transgenders until we can all laugh together. The streets are talking and Dave is listening. At some point, when everyone is open, I’m sure the communities will come together,” Chappelle appears to be walking that back, saying he’s “not bending to anyone’s demands.”

“I say what I said, and, boy, I heard what you said. Oh my God. How could I not?” he told an audience in an Instagram video shared with his more than 2.3 million followers. “For the record, and I need you to know this, everyone I know from that community has been nothing but loving and supportive. So I don’t know what this nonsense is about.”

If he doesn’t know what “this nonsense” is about then his he’s clearly not paying very close attention.

In the video, Chappelle also denied reports that he refused to meet with members of the LGBTQ community to discuss the uproar, claiming, “If they had invited me, I would have accepted it, although I’m confused about what we’re speaking about.”

Related: Jon Stewart has weighed in on the Dave Chappelle controversy and Lord help us

But this doesn’t square with what Ashlee Marie Preston, who helped organize the employee walkout at Netflix, said when she told reporters last week that she had invited him to sit down and talk but “Dave chose not to show up.”

“If you want to meet with me, I’d be more than willing to, but I have some conditions,” Chappelle said in the video. His first demand is that anyone who wants to talk to him must first watch his transphobic special from beginning to end. His second demand is that he gets to pick the time and place where they meet.

“They said you want a safe working environment at Netflix,” he says. “Well, it seems like I’m the only one that can’t go to the office anymore.”

Hmmm. Last we checked, finding resolution required a little bit of bending. Bullying the people you’ve hurt into doing things your way after you’ve already caused them extreme harm is not how progress is made.