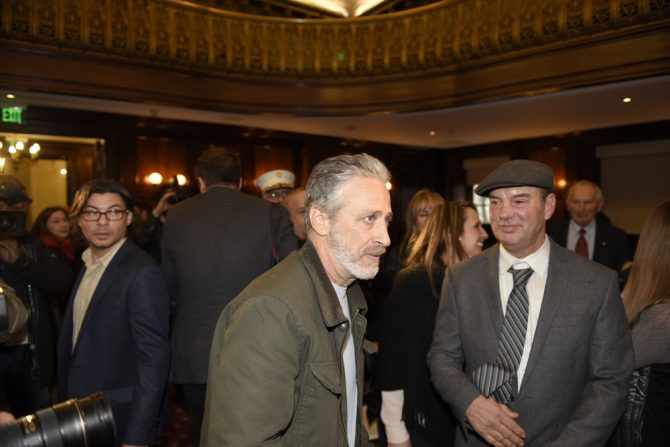 For whatever reason, Jon Stewart has decided to weigh in on the Dave Chappelle Netflix controversy and–surprise!–he’s coming to the transphobic comedian’s defense.

“He’s one of my favorite people on the planet,” Stewart told TMZ yesterday, “and he’s just a good, decent… You know, if there is any miscommunication, I’m sure that–I love that dude, like as a person. He’s warm and wise and all those things.”

Did you catch that, folx? Because Dave Chappelle is nice to Jon Stewart, a wealthy straight white cis male, that means everyone should cut him some slack for all the horrific things he’s said about LGBTQ, particularly trans, people.

According to Stewart, it’s all just one big “miscommunication.”

“I know his intention is never hurtful,” Stewart continued. “He’s not that kinda person.”

Except Chappelle is that kinda person. It’s not like this is the first… or second… or third time he’s been under fire for expressing anti-LGBTQ sentiment in his comedy sets. It’s a pattern of his, and people are finally over it.

Our friend Henry Giardina at Into writes:

Hm, well, let’s take a look at that for a second: first of all, language has power. The idea that someone can be a fundamentally “good” person and use harmful language and stereotypes to actively harm and oppress others doesn’t make a whole lot of sense. It seems that Dave Chappelle indeed has spoken from his heart in “The Closer,” and his heart feels like trans women are pathetic and scary. So that’s…not great.

As for Chappelle, after initially digging in his heels, he now says he won’t make anymore jokes about trans people, or “transgenders” as his rep calls them.

“Dave stands by his art: No more jokes about transgenders until we can all laugh together,” his rep tells TMZ. “The streets are talking and Dave is listening. At some point, when everyone is open, I’m sure the communities will come together.”

Chappelle also indicated he would be open to talking with the trans community and Netflix about everything. He’s just waiting for the invitation.

But Ashlee Marie Preston, who helped organize the employee walkout at Netflix this week, says she has invited him sit down and to talk about the harm she and others believe he’s caused the LGBTQ community, but “Dave chose not to show up.”

Chappelle’s camp has accused Preston of making up the claims. They also didn’t offer any explanation for why Chappelle can’t be the first to extend the olive branch and initiate a meeting.