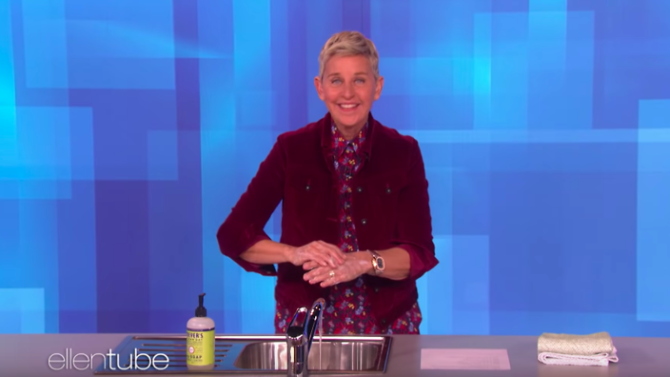 It’s been one year since the sh*t hit the fan and WarnerMedia launched an internal investigation into Ellen’s once-hit daytime talk show amid accusations of bullying, harassment, and abuse.

Now, an insider at the show tells Fox News (ugh) that there’s a “slightly different environment” these days and morale among staff is improving. So that’s good, right?

But getting to this point has not been easy, they add.

Despite keeping her head down throughout much of last year’s controversy, the insider claims Ellen was freaking out behind closed doors and truly believed she was “dead meat.”

“Ellen felt there was a slight chance she could turn things around this last season, but she was unable to do that,” they add.

Season 18 of the show saw a 43% decline in viewership, losing roughly 1 million viewers, and putting Ellen well behind many of her former competitors, including Dr. Phil and Live: With Kelly and Ryan. Instead, she found herself competing with Rachel Ray and Jerry Springer’s former bodyguard’s talk show, The Steve Wilkos Show.

But another insider claiming to be a former staffer says they still don’t believe Ellen fully understands why people stopped tuning into her show last year.

“I don’t think that she’ll ever admit to having done anything wrong,” they say, adding that the funny lady has an “ego so big that I don’t think she’s learned.”

“I just want Ellen to understand what happened instead of saying it was ‘orchestrated.’ I think what the crew hopes more than anything is that she’s learned you can’t treat people like that.”

A third insider who previously worked for Ellen agrees, saying the TV host clearly “hasn’t learned a lesson” given her remarks to Savannah Guthrie, in which she claimed to have absolutely no idea about her show’s toxic work environment before reading about it in the press.

“For me to read in the press about a toxic work environment when all I’ve ever heard from every guest that comes on the show is what a happy atmosphere this is and what a happy place is,” DeGeneres told Guthrie.

Did you feel like you were being canceled? –@SavannahGuthrie

A premiere date for Season 19 of The Ellen Degeneres Show has not yet been announced, though it will likely be sometime in mid to late September.