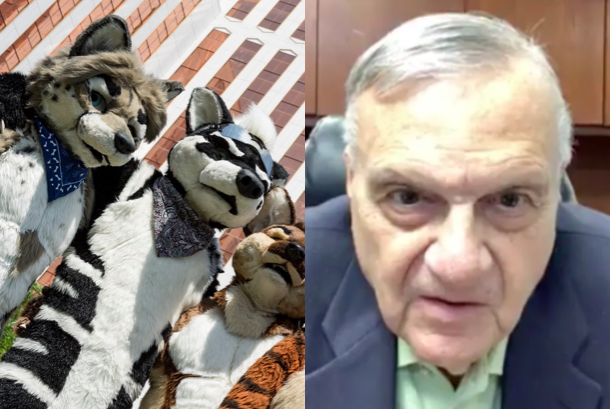 Racist, xenophobic, antigay former Maricopa County, Arizona sheriff Joe Arpaio says he had no idea what he was talking about when he recorded a welcome message for the furry convention to his state.

“Good luck organizing the Arizona furry convention, which is for animal lovers,” Arpaio said in the video. “As far as what animal I’d like to be, I’m kind of partial to dogs, but I love all animals.”

Except that the furry convention is not for animal lovers. At least not the kind Arpaio was talking about. It’s a fetish subculture for people who are into dressing up as anthropomorphized animals, usually for sexual gratification.

Have you had your day ruined yet? pic.twitter.com/3DSuYES77F

88-year-old Arpaio told the Arizona Republic afterwards that he wasn’t aware of what goes on at furry conventions and that he only agreed to record the video because he’s “a big animal lover.”

“I get these requests all the time–people wanting me to say happy birthday, this and that,” he said. “I think I’ve gotten over 240 already. With my popularity, I could charge $1,000 for each one, but I only charge $30.”

“I responded to the animal situation because I want people not to abuse their animals,” he added.

twitter has some wild stuff but joe arpaio revealing his fursona was not what i expected to see when i woke up this morning https://t.co/WYBvCLkD4M

The stuff of nightmares.

“Your costume is ready, Joey” pic.twitter.com/SopXsxHjuv

I remember my first furry party.

Once you go Koala you never go back.

Expecting he will also soon learn what a WAP is.

Furries are animal lovers? Well, it’s not *wrong* per se….

in his defense, his jitterbug phone doesnt have the google man.🤷