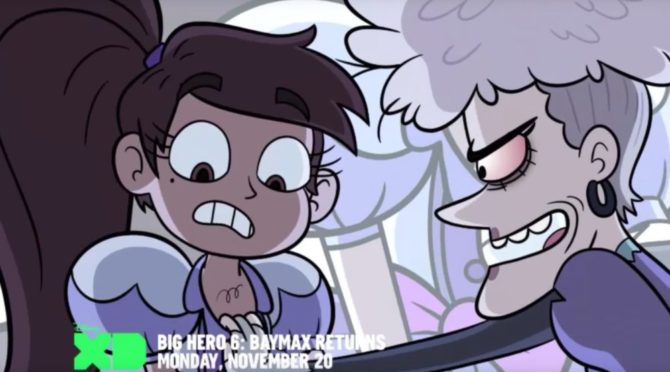 The gay agenda is at it again, and this time it’s out to brainwash children into believing they can be free to express themselves. The horror!

In a recent episode of the Disney animated series Star vs. The Forces of Evil, a boy named Marco creates a female alter-ego — Princess Marco Turdina — in order to infiltrate ‘St. Olga’s Reform School for Wayward Princesses.’ Once inside, he leads the girls to revolt against the authoritarian headmistress, helping the other princesses to believe they can be themselves.

The ousted headmistress, Ms. Heinous, returns, outing Princess Marco as a fake because he has chest hair.

“That doesn’t prove anything,” one princess in the crowd replies. “Princesses can be hairy!”

“Yeah! We believe in you, Turdina!” another shouts out.

Marco then snatches his own wig, telling the girls, “I lied to you. I am a boy.”

“This, princesses, is why you need me running St. Olga’s,” Ms. Heinous tells the crowd. “Look where all this freedom got you, living in filth and championing a hero that’s been lying to you all along.”

“‘Wait, no, why does it matter if he’s a boy?” another princess asks. “Nothing he said was wrong.”

Related: Disneyland Paris forbid this little boy from attending their ‘Princess for a Day’ Celebration

“Yeah,” piggybacks another. “He can think for himself and so can we.”

“He can be a princess if he wants to!” another shouts.

“Turdina is a state of mind!” cries another, cleverly appealing to the parents and older kids who are perhaps watching the show with their young children/siblings.

All in all — a pretty advanced exploration of gender with a lesson any kid can apply — boys can be princesses too.