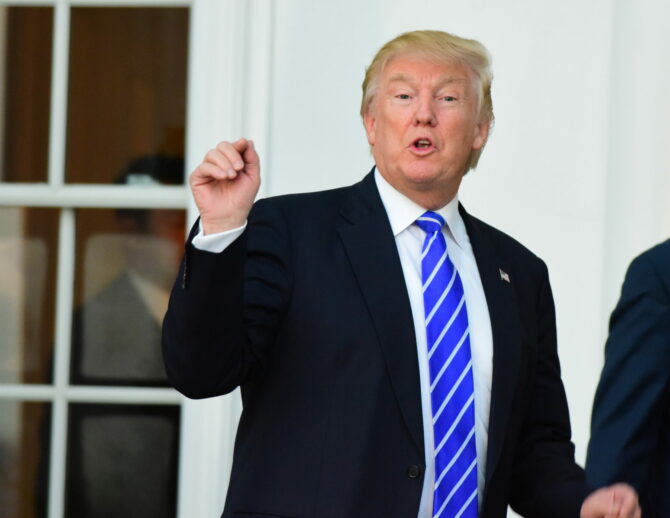 Donald Trump has a new grift.

In recent weeks, he’s has been flying all over the country in his private plane, Trump Force One, giving speeches and trying out a shady new fundraising strategy on unsuspecting superfans.

The ex-president has been offering anyone who gives any amount to his PAC, Save America, the chance at a vacation getaway. That’s right, Team Trump is offering people sweepstakes as an incentive to give their hard-earned money to his political operation.

In the weeks leading up to his recent appearance in New Orleans, Trump sent over 15 bulk emails to small-dollar donors across the country offering them the chance at dinner with the him in the Big Easy.

“We booked you a plane ticket,” one of the message said, along with a photo of Trump photoshopped in the French Quarter. “Contribute ANY AMOUNT RIGHT NOW to be automatically entered to have dinner with President Trump in New Orleans.”

And now, the grift.

After taking people’s cash, Trump never followed through with his promise to select someone to wine and dine in the French Quarter. Instead, he took the money and ran. Or rather, he flew… on his private plane that almost crashed shortly after takeoff because of engine failure.

But no such winner was flown to New Orleans last weekend, according to four people familiar with the matter. No flight or “very nice” hotel was booked. Trump had no individual meeting with a small-dollar donor, instead only privately greeting a handful of Republican Party donors who gave large checks, taking pictures with some of the party’s most well-heeled members and speaking to a larger group of donors who each gave tens of thousands of dollars.

The email pitches probably raised a sizable sum for Save America. Some similar contests to meet Trump have raised hundreds of thousands of dollars, according to people involved.

Trump initially said he would pick a New Orleans sweepstakes winner by February 28. That never happened. Now, a spokesperson chalked the whole thing up to an “administrative error.”

In a statement released on Friday, Taylor Budowich said: “President Trump has awarded more than 100 prizes to contest winners across America, but due to an administrative error in this individual circumstance, the contest winner was not properly notified for last weekend’s event in New Orleans. Consistent with the rules of the sweepstakes, a substitute prize will be awarded to the winner.”

Budowich didn’t specify what the substitute prize would be, but the official contest rules state it should be of “greater or equal value.” He also would not say how much money the New Orleans contest raised or how winners would be chosen and notified.

“We protect the privacy of participants, given the hostility and intimidation tactics often used against supporters of President Trump,” he remarked.

According to former federal prosecutor Peter R. Zeidenberg, if Team Trump knowingly took people’s money without ever intending on honoring the sweepstake, that would be illegal.

“If, on the other hand, they had planned a dinner but it fell through, then that’s definitely not a crime,” he tells the Washington Post.

OMG! This makes me question whether Lara and Eric Trump really did spend dinner talking about me, like “Lara Trump” told me.

It’s almost as if the Trumps all lie to trick people out of their money. pic.twitter.com/goa1qmabyu

“Administrative error” = “we got caught”

Except they apparently had the same “administrative error” every time they did this.
It’s something you can google

“it was an “administrative error” that the prize was never awarded” pic.twitter.com/w2vYBxRRBU

So then they gave all the money back?🤔

This has been a recurring scam. I get the emails. Has anyone ever won?

Not true, the winners never showed up. pic.twitter.com/4mfgiKXGQ3

I’m convinced at this point that they will NEVER learn.