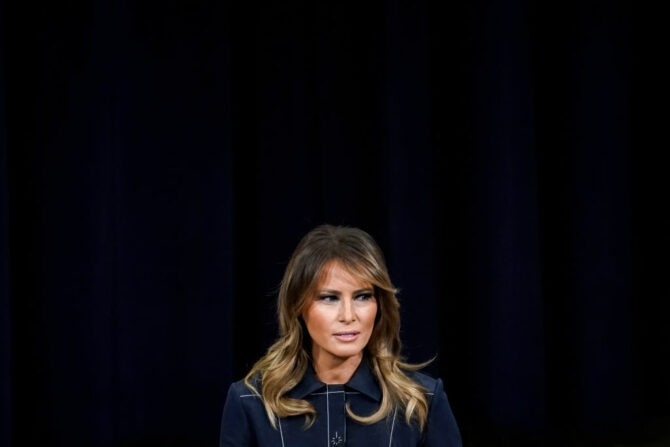 Parler just announced a new “special arrangement” with the ex-FLOTUS that involves her sharing “exclusive communications” on the social media network.

The platform, which is popular among Donald Trump supporters, conspiracy theorists, and far-right extremists, says Melania will share “exclusive communications on Parler,” adding that it is already powering her website, MelaniaTrump.com.

“In the time that Parler and Mrs. Trump have been working together, we have found a new level of productivity and engagement with both her, her team, and her brand,” Parler CEO George Farmer said in a statement this morning.

Did you catch that, folx? Melania Trump is apparently a “brand” now, even though the only thing she sells are NFTs on her website. Although whether she’s even selling them remains a mystery since Vice just reported that the sale of her most recent NFT was purchased for $170,000 by the creator of the NFT, who is, presumably, Melania herself.

Follow the?from the Sale of Melania’s $170,000 NFT. The WINNER of Melania’s NFT got the?from none other than the CREATOR of the NFT itself, & an address linked to the NFT CREATOR got the?back.
That’s a 360 degree sale!
Did ?@MELANIATRUMP? buy it? https://t.co/iwSQqg59ot

In her own statement released this morning, Melania said she’s “excited and inspired” to be working with Parler, which she believes “empowers its users to foster productive discourse.”

Like last year, when it was revealed the MAGA militia used the platform to embolden domestic terrorists and plot the Capitol insurrection.

Related: Conservatives are PISSED at Dr. Jill Biden… but they don’t actually seem to know why

“I am excited and inspired by free speech platforms that give direct communication to people worldwide,” Melania added. “Parler has been on the forefront of utilizing Web3 technology and empowers its users to foster productive discourse.”

The ex-FLOTUS still has active accounts on Facebook, Twitter and Instagram. It is unclear whether her partnership with Parler will impact her activity on those three platforms. Also unclear is whether she’ll have any involvement with her husband’s social media platform, Truth Social, which launches later this month.

Not the first “special arrangement” Melanie has been a party to.

— Are we in the Dumbest or Darkest Simulation? (@DumbOrDark) February 9, 2022

That should BeBest for her level of communication

— Meerkats R On the Road to Nowhere (@MeerkatsRMammal) February 9, 2022

What happened to “Truth Social” lol!?

Her life is based on “special arrangements“