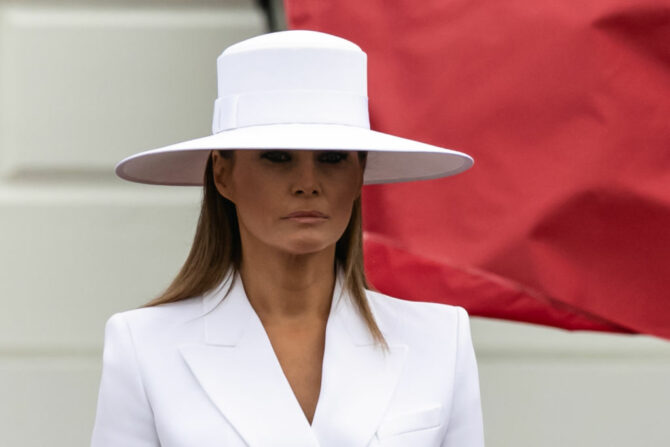 Well, it looks like Melania Trump‘s latest online auction was a total bust.

When Melania first announced the auction earlier this month, she said she would only accept payment via SOL, a cryptocurrency on the Solana platform. At the time, the value of a SOL was roughly $170. But by the time the auction ended on Tuesday, the value had dropped almost $100, to $93.

While the minimum requirement of Solana tickets was met, the $250,000 threshold wasn’t met because over the last two weeks, almost the entirety of the auction, the crypto market has taken a massive dive, with values of various currencies falling 20, 30 or even 40%, as was the case with Solana (SOL.)

As a result of the lack of interest in Trump’s items, an inflated opening bid amount and a plunging market, the “Head of State Collection” — as Trump dubbed her lot — appears to have sold for about $170,000, $80,000 below the anticipated opening bid. CNN reached out to Trump’s spokesperson for comment on the auction.

Of course, $170,000 is still an absolutely insane amount of money for a hat (and a watercolor of a hat… and an NFT for the watercolor of the hat), but we’re sure Melania is still pissed it didn’t go for more. Also, she only got five bids, and we wouldn’t be surprised if they all came from the same person: her husband.

Related: Eric Trump issues “fraud alert” to followers and the responses are exactly what you’d expect

A portion of the disappointing sale will purportedly go to charity, though the former FLOTUS has declined several times to say exactly how much she intends to donate and how much she might deposit into an off-shore bank account.

Melania was auctioning this hat for 250K but the highest cryptocurrency bid was around 155K. As Ivanka sneered, "155K? That won't even buy a Republican senator" pic.twitter.com/fZwbkUp8Gc

No one wanted to buy it. That’s what actually happened. There were 5 bids!

Melania Trump, the third lady auctioned her hat. I don't really care, do you?

#Melania's crypto hat auction was so successful, "Judge" Jeanine Pirro has decided to try a hat auction as well. (Thanks for the photo, @NotHoodlum ) pic.twitter.com/MndgMP4tUv

That’s OK, Donald will just get the RNC to cover the losses.

Melania’s hat and other items didn’t get any interest from her auction. I can’t recall any other First Lady selling state paid for items for profit. Will she try to sell the Whitehouse stolen towels next?

I am shocked Melania's hat failed to meet minimum bid requirements. I know several of his ardent supporters in my area would gladly give her a 12 pack of Natty Lite and confederate flag for it. Art of the Deal. #BeBest #YardSale

Shortly after Melania announced the auction, Hillary Clinton took to Facebook to throw a little shade her way by sharing a throwback photo of herself rocking a beaded purple gown in the early ’90s.

“Some sparkle from right around this time of year, 1993,” Clinton wrote. Then came the kicker. “This dress lives at the Smithsonian now!”

Of course, Melania has never been one to honor tradition. Nor has she ever been one to turn down an opportunity to make a few bucks. Unfortunately, she didn’t make as many as she was hoping for this time around.