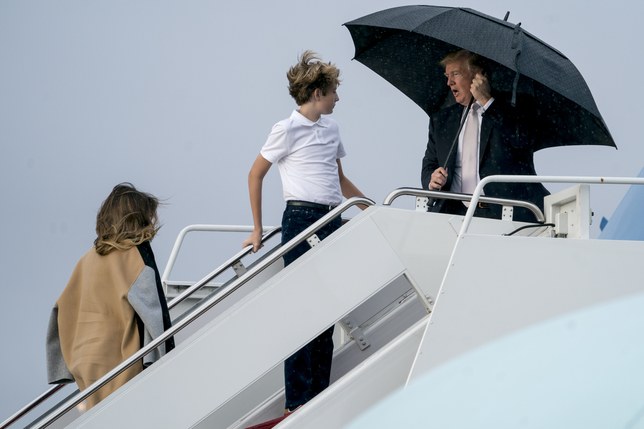 This just in: Donald Trump has (once again!) been caught acting like a total douchebag to his own wife and child.

Related: These hilarious memes prove Donald Trump is definitely the most “stable genius”

In new press photos and videos taken yesterday, the racist 45th President of the United States of America can be seen stomping up the stairs to board Air Force One while holding an oversized black golf umbrella. Trailing behind him, and exposed to the harsh elements of the tarmac, are Melania and their 11-year-old son Barron, wet and windblown.

Here’s Trump holding an umbrella over himself while boarding Air Force One with Melania & Barron, because his hair. pic.twitter.com/dsfKaNNd5U

just seen @realDonaldTrump getting on his plane holding an umbrella for himself while his son and wife get soaked in the rain. says it all about him ! #selfishTrump

It would never even occur to my husband to cover himself if my daughter and I were standing with him in a storm. He’s such a disgrace. https://t.co/TSgyUVH5W3

What a #ShitholePresident!! The selfish bastard really does only care about himself. https://t.co/8VIpqmyBjV

@realDonaldTrump is a complete douche… to EVERYONE! https://t.co/9lO1YW0JQ2

No umbrella for Barron as he boards Air Force One with @realDonaldTrump. #TrumpInPalmBeach pic.twitter.com/hKgJaLin0X

Everyone look what a "gentleman" @realDonaldTrump is! Needs a whole bigly family umbrella for his fat lard ass, while his family stands in the rain… ????? pic.twitter.com/A9uN8RbVOx

We think we speak for everyone when we say… What a shithole!