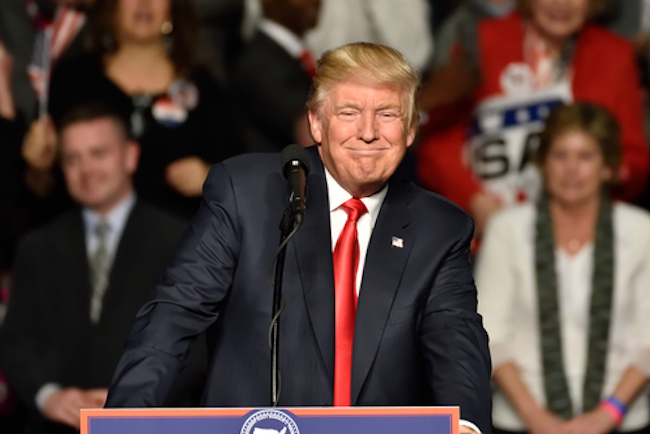 For the second time in a month, Donald Trump is set to address an antigay summit.

He became the first sitting president to ever speak at the summit of a confirmed anti-LGBTQ hate group by participating in the Family Research Council’s Values Voter Summit, during which he praised leader Tony Perkins, who in the past has linked gay rights to the Holocaust and compared homosexuals to Nazis.

Related: Colby Keller: “I don’t support Trump” but “I did vote for Trump.”

Next up, he’ll be making an appearance at a summit for the antigay Heritage Foundation. The group confirms Trump “will be speaking to Heritage members at our annual President’s Club Meeting this Tuesday, October 17”.

“Heritage has been instrumental in providing the Trump administration with sound policy advice and experts who now serve in key government positions.

We are honored to have the President of the United States as our keynote speaker.”

The group cites a report claiming “no group is more responsible for helping to craft Trump’s agenda than the Heritage Foundation…Today the group’s fingerprints are on virtually every policy Trump advocates.”

“Americans should reject such revisionism and work to restore the essentials that make marriage so important for societal welfare: sexual complementarity, monogamy, exclusivity, and permanency.”

The organization has been heavily pushing the First Amendment Defense Act, a law that aims to grant religious folks the ability to discriminate based on gender identity and sexual orientation.

The Foundation explains its stance thus:

“FADA protects the rights of individuals and the associations they form—small businesses and charities, schools, and social services—to speak and act in accordance with their belief that marriage is the union of a man and a woman in the public square and the marketplace.

It enacts a bright-line rule that government can never penalize certain individuals and institutions for acting on the conviction that marriage is the union of husband and wife or that sexual relations are properly reserved to such a union….

It is critical to protect the right to dissent and the civil liberties of those who speak and act in accord with what Americans had always believed about marriage—that it is the union of husband and wife.

At the federal level, the First Amendment Defense Act would help achieve civil peace amid disagreement and protect pluralism and the rights of all Americans, regardless of what faith they may practice.”

During his speech at last month’s summit, Trump said: “I am honored and thrilled to be the first sitting president to address this gathering of friends, so many friends.”

“I pledged that in a Trump administration, our heritage would be cherished, protected and defended like you have never seen before….

To protect religious liberty, including protecting groups like this one, I signed a new executive action in a beautiful ceremony in the White House on our national day of prayer.

Among many historic steps, the executive order followed through on one of my most important campaign promises, important to so many of you.

To prevent the horrendous Johnson Amendment interfering with your First Amendment rights.

We will not allow government workers to censor sermons or target our pastors, our ministers, our rabbis.

These are the people we want to hear from and they’re not going to be silenced any longer.”