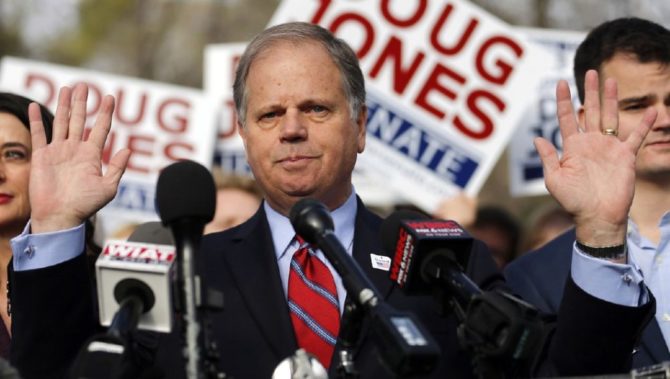 The Democrats’ great white hope, United States Senator-elect from Alabama Doug Jones, is already failing to live up to expectations… and he hasn’t even been sworn into office yet!

Speaking to CNN’s Jake Tapper on State of the Union earlier this week, Jones was asked about the hottest topic in American politics right now: sexual assault. Specifically, he was asked about the allegations that have been hovering over Donald Trump since before he took office.

“(T)hose allegations were made before the election, and so people had an opportunity to judge before that election,” Jones said.

He continued: “Let’s get on with the real issues that are facing people of this country right now, and I don’t think that the President ought to resign at this point. We will see how things go. But, certainly, those allegations are not new, and he was elected with those allegations at front and center.”

Um, let’s not forget Trump’s ties to Russia, as well as his organization’s shady business dealings, were also “front and center” during the campaign, and now there’s a special counsel investigating those.

Why is it that the victims of Trump’s alleged sexual assault shouldn’t be taken as seriously?

If that wasn’t alarming enough, Jones also hinted that he might not be as liberal as he led people to believe on the campaign trail.

“I’m going to talk to people on both sides of the aisle, try to figure out what I think is in the best interests of my state and in the country,” he said. “Don’t expect me to vote solidly for Republicans or Democrats.”

Maybe Jones is just trying to appease the people who didn’t vote for him? Or maybe he’s not the Democratic savior he’s been painted out to be?

One thing is clear: With all the noise that surrounded Roy Moore’s campaign, many inadvertently overlooked Jones’ politics. They were so desperate to keep the alleged pedophile out of office that they failed to spot the guy who’s willing to throw sexual assault victims under the bus.

And this, they say, is why we can’t have nice things.

bottom of the barrel
42