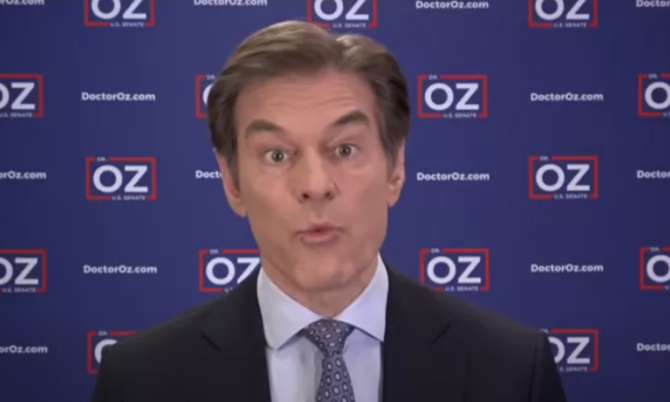 Dr. Mehmet Oz clearly thinks very highly of himself. The voting public does not appear to agree.

The TV doctor, who lives in New Jersey but is running for U.S. Senate in Pennsylvania, has again taken to social media to challenge Dr. Anthony Fauci to a public debate.

Fauci, who is currently the Director of the National Institutes of Allergy and Infectious Diseases (NIAID), is most certainly not a candidate for one of Pennsylvania’s two senate seats. But that hasn’t stopped Oz from pretending like it’s totally normal for an underperforming Senate primary candidate to debate the nation’s leading infectious disease expert on the national stage.

In a GOP straw poll last month, Oz received just one–yes, ONE–vote out of more than 100 cast, despite spending $5.4 million on TV ads. In two other straw polls, he placed third in one and fourth in the other.

Still, he released this challenge to Fauci: “It’s past time Fauci faces the fact that he got COVID wrong. So, doctor to doctor – let’s debate. This Doctor is in, are you?”

It's past time Fauci faces the fact that he got COVID wrong. So, doctor to doctor – let's debate. This Doctor is in, are you? pic.twitter.com/KSPTsk1dS3

And this past weekend, Oz again tried to grasp at straws of relevancy by re-sharing the video and adding: “I challenged Dr. Fauci to a debate 44 days ago, and still haven’t heard a thing from him… [cricket emoji]”

Why would one of the world’s foremost epidemiologists debate a man who was once a cardiologist, who now sells fake supplements to the unsuspecting public? Stay in your lane. And by your lane, I don’t mean running for a seat in a state you don’t live in.

Because he’s working….and you don’t matter

Dr Fauci is a serious physician-scientist and immunologist who genuinely cares about the wellbeing of the American people.

You, on the other hand, are a quack who without the help of Oprah Winfrey, would be selling used colostomy bags from the back of a Ford Pinto. https://t.co/EmkFhVtKdR

It’s been three months since I asked your campaign for an interview, but I still haven’t heard a thing from you. And for someone who keeps dodging debates in Pennsylvania, this is quite the hypocritical statement here, isn’t it?

God I love Dr Fauci. Imagine all the nonsense this professional and dignified man has had to deal with ✊️🙏🏻💙❤️

Remember when you said it was okay for 2-3% of school children to die? https://t.co/0MwXJCQ9Co

Dr Fauci is an American physician-scientist and immunologist serving as the director of the National Institute of Allergy and Infectious Diseases (NIAID) and the Chief Medical Advisor to the President. You are running for Senate in a state where you do not live. What’s to debate?

More than half of Dr. Oz’s recommendations on medical talk series — including The Dr. Oz Show — had either no evidence or actually went against medical research, according to a study published in the British Medical Journal.

He’s not running against you. Do you even know who your opponent is? Are you confused? And…. he’s a real doctor.

You… do know he’s not running against you, right?

Maybe because he’s a real doctor and a little too busy to date a talk show host hack stooge.

I challenged Stephen Hawking to a debate about physics weeks ago and still haven’t heard from him.

Subscribe to Queerty for a daily dose of #politics #dr.oz #mehmetoz stories and more