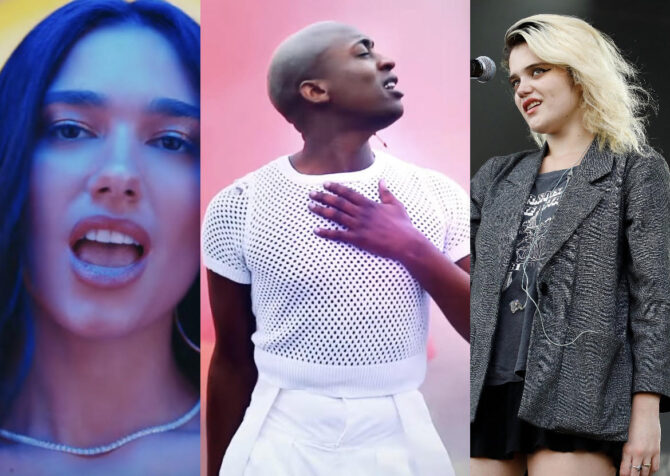 It’s the last weekend music drop before Pride month kicks off, and the girls, gays, and theys of pop are getting their entries in just under the wire. We don’t know what was in the water this week, but some of the girls seem to be very… excited, in a word! Honestly, after Jonathan Bailey’s modesty thong story, Chris Hemsworth’s clothes flying off, and that oddly interesting Time Traveler’s Wife scene this week, we’ll have what they’re having.

Please, everyone, join your hands in prayer as we ask Sky Ferreira not to give us false hope once again. Her sleeper hit single “Everything is Embarrassing” in 2012 and debut album My Night, My Time in 2013 took the young Lana/Marina/FKA Twigs gays by storm before she essentially vanished. Her second album Masochism has been teased for the past eight (yes, eight!) years, but “Don’t Forget” is such a triumphantly synthy earworm that it’s hard not to get excited. Also, her recent tension with Halsey on social media — nothing too serious, just enough to cause conversation — might just indicate that she’s ready to be back in the public eye.

In The Sunrise by Omar Rudberg

Every bit of gratitude to queer TV hit Young Royals for exposing us to Omar Rudberg. Omar was originally pursuing music before his foray into acting, and with this album it’s clear to see why. OMR displays the range of the Venezuelan-Swedish artist, displaying Latin influences and bilingual tracks all mixed with that Swedish Max/Shellback pop engineering the industry has come to love. “In The Sunrise” definitely trends more towards the latter, but the range across this debut album is worth exploring.

“Potion” is definitely the blockbuster music release of the weekend. We saw her glow-up in Future Nostalgia, but this song is another great reminder that Dua has come a long way since her last Calvin Harris collab, the iconically choreographed “One Kiss”. This single off the upcoming Funk Wav Bounces Vol.2 is STRONGLY reminiscent of “Feels” with Katy Perry and Pharrell off Funk Wav Bounces Vol.1, but when you’re trying to make a song of the summer, “Feels” is absolutely not a bad blueprint to work off.

It’s still a little early to call what the official bona fide Song Of The Summer™ is, but with these tracks to add to the roster, the race is getting tight.

love in the family
22