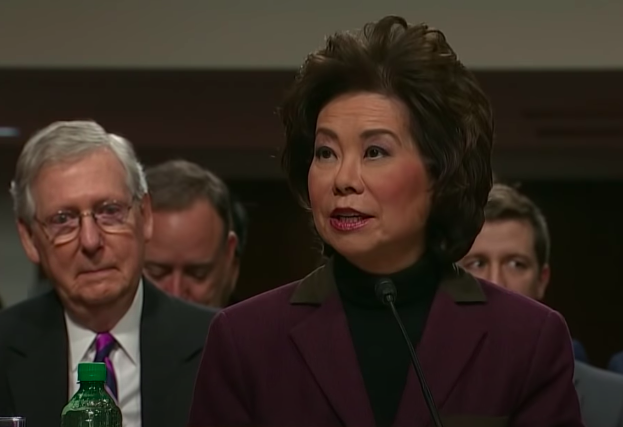 Elaine Chao is the latest member of Trump’s orbit to be accused of abusing her power while serving as Transportation Secretary from January 2017 to January 2020.

According to a damning new report released by the Department of Transportation’s inspector general, Chao committed four kinds of ethics violations when she repeatedly used her staff and her position of power to call in personal favors.

The report alleges that Chao invited family members to tag along on a work trip and instructed DOT public affairs staff to help promote her dad’s shipping business, market his book and book tour, and edit his Wikipedia page.

The report also alleges that she directed DOT staff to look into a work permit application for someone connected to her family’s philanthropic foundation, as well as run personal errands, like sending Christmas ornaments to her family and asking a repair shop to expedite her request by telling them she was Secretary of Transportation.

Looks like Mitch McConnell and his wife Elaine Chao were misusing her position of power to enhance their own wealth.

“Secretary Chao used her official position and taxpayer resources for the benefit of herself and her family,” said Rep. Carolyn Maloney, who serves as chair of the House Committee on Oversight and Reform, said in a statement.

Chao has denied any wrongdoing and the inspector general’s office ultimately said it does not plan to pursue the case further “based on the lack of prosecutorial interest” from the Justice Department.

The Q in GQP stands for Quid Pro Quo

Prior to working for the Trump administration, Chao worked in President Bush’s Labor department where she was accused of ignoring anti-LGBT discrimination.

In 2015, she accepted $50,000 to give a five minute speech at an event hosted by the vehemently antigay Iranian militant group Mujahedeen-e-Khalq.

And, of course, she’s campaigned for years on behalf of her homophobic husband, obstructionist and Senate Minority Leader Mitch McConnell.

Chao resigned as Transportation Secretary one day after the January 6 insurrection on the U.S. Capitol. The position is now held by Pete Buttigieg, who made a point to distance himself from his predecessor’s ethics woes as soon as he took over.

A spokesperson for the DOT says Buttigieg “made it a point to have an ethics briefing during his very first day on the job” and that he is “committed to upholding the highest ethical standards for himself and his team at the Department of Transportation.”