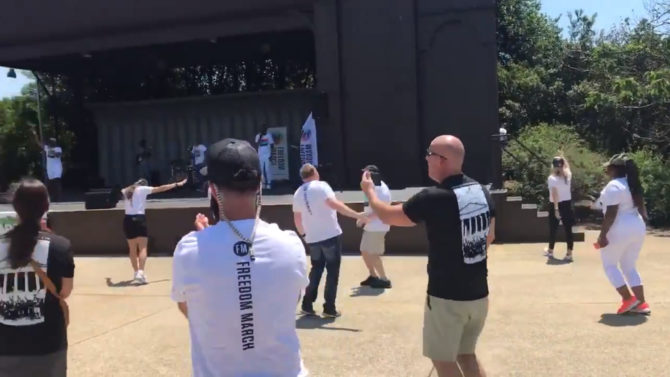 A group of self-described “ex-gays” tried to rally against the Equality Act in Washington DC this weekend. In an unsurprising twist, very few people actually attended.

Our sister website LGBTQ Nation reports that the “Freedom March”–the generically titled rally–attracted more bewildered onlookers than actual participants at the Washington Monument on Sunday (June 6). Press for the event had hyped it as a “diverse group of former LGBTQ individuals in worshipping, sharing our testimonies, and celebrating freedom in Christ publicly on the Mall in Washington.”

The event comes as a part of a campaign by CHANGED–a group of people who claim to have been “cured” of queer identity through Christian conversion therapy. According to founder Elizabeth Woning, members of CHANGED identify as “Christians with LGBTQ in our past. Many, like us, have changed. We left LGBTQ because we wanted to.”

Footage of the event by The Washington Blade shows only about six people dancing, while a few others stand by filming or just gawking at the bizarre sight. In a statement about the rally, Woning further added that “CHANGED has come to DC to appeal to Congress to focus on human dignity, not identity politics.”

The United Nations, American Psychological Association and American Medical Association have deemed conversion therapy ineffective at changing sexual orientation or gender identity, and moreover, a practice deeply harmful to the patient. Recent years have seen a number of states ban the practice, much to the ire of groups like CHANGED.