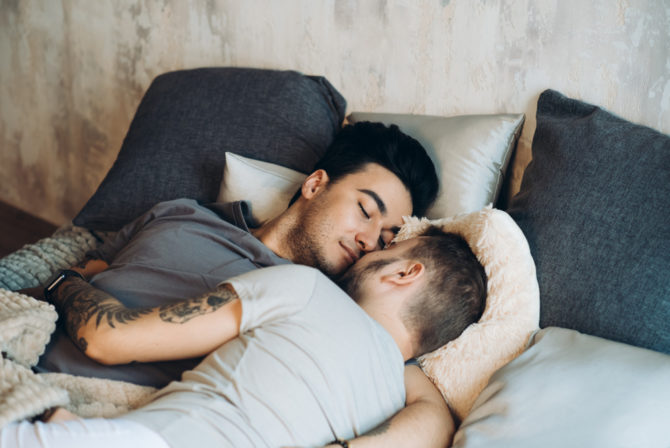 Facebook certainly doesn’t mind if you’re gay, but a new rule forces users to keep what they do in the bedroom to themselves. Or at least move the conversation to Messenger.

The new content policy makes things like saying you’re a ‘top’ or a ‘bottom’ off-limits, in a move the social media behemoth says will combat content that “facilitates, encourages or coordinates sexual encounters between adults” and bars “sexually explicit language that may lead to solicitation.”

“Sex positions,” “sexual preference” and any number of other sexy umbrellas pertaining to “sexual hints” are all means for moderator intervention now.

Another common phrase you see a lot — “send nudes” — is a no-no, whether its meant as a joke or an actual request. The new rules ban “offering or asking for nude images.”

“Do not post content that engages in implicit sexual solicitation, which can be identified by… using sexual hints such as mentioning sexual roles, sex positions, fetish scenarios, sexual preference/sexual partner preference, state of arousal, act of sexual intercourse or activity (sexual penetration or self-pleasuring), commonly sexualized areas of the body such as the breasts, groin, or buttocks, state of hygiene of genitalia or buttocks.”

Understandably, many users have balked at the new guidelines:

Facebook’s updated community standards are fucking WILD! Stating your sexual orientation is now literally against the rules and is seen as solicitation.
Also butts are not ok anymore either.

Fuck this so much. Everything about it. pic.twitter.com/VMN1Drq9mN

Read the whole thing. I don’t want any one banned. https://t.co/qpdPAjRa9T pic.twitter.com/t1xPFiCntF

Even a Fox News reporter realized something might be amiss here:

Have #LGBT folks noticed that #Facebook updated its community standards to ban a wider range of language around "sexual solicitation"? If so, what do they think? Email or DM me. https://t.co/zfskc0NsEg

And one user pointed out the timing of the change, so close to Tumblr banning all adult content:

A Facebook spokesperson defended the changes, which were implemented in October, to PC Mag: “This change was prompted, in large part, by conversations with our content reviewers, who told us that the sexual exploitation policy did not adequately distinguish between exploitation (e.g. ‘My ex was a slut. Look at the photos she sent me.’) and solicitation (e.g. ‘Looking for swingers. Friday at 8 PM, [name of bar]. Wear pink.’).”

The spokesperson continued: “We’ll be putting out the minutes from our policy development meeting at which these changes are discussed and adopted, and we’ll also publish updates to our Community Standards so that people can track changes over time.”

As previously mentioned, news of FB’s sexual word policing comes as blogging site Tumblr will soon remove all adult content from its platform, much to the chagrin of many LGBTQ users.