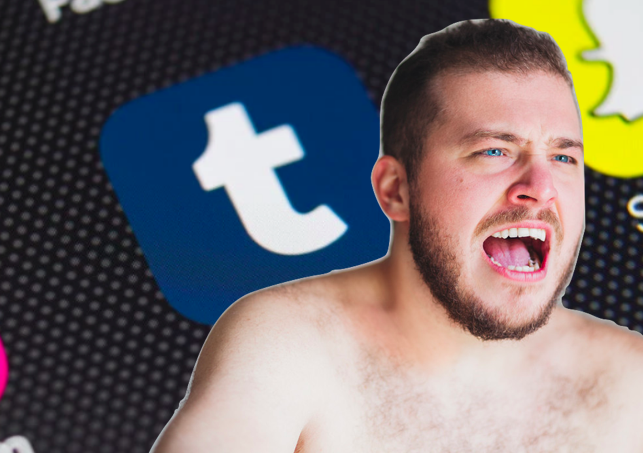 Tumblr sent shockwaves across the world this week when it announced it will no longer allow x-rated content beginning on December 17.

Over the past several months, and inspired by our storied past, we’ve given serious thought to who we want to be to our community moving forward and have been hard at work laying the foundation for a better Tumblr. We’ve realized that in order to continue to fulfill our promise and place in culture, especially as it evolves, we must change … Today, we’re taking another step by no longer allowing adult content, including explicit sexual content and nudity (with some exceptions).

Related: What does Tumblr’s ban on x-rated content mean for recovering adult film addicts like this guy?

Many are concerned about about how sex workers and sex-positive content creators will be adversely affected by the policy change.

The fury has been unending…

Congrats to Tumblr for finally destroying its arch enemy, Tumblr

Anyone else in the mood to just collectively boycott #Tumblr from the 17th until they change their indiscriminately damaging new policy?

Id like my first tweet to be a fuck you to @tumblr . A website where you can show open self harm wounds and show young girls how to starve themselves but nsfw content is what they remove. #tumblrisoverparty #fucktumblr #tumblrisdead

And just like that, @tumblr will be irrelevant to everyone, thanks to their stupid decisions and bend-over mentality. #tumblrisdead

Oh no its my ankle. #tumblr will delete it. pic.twitter.com/YTVwz9PxWh

How do you feel about Tumblr banning adult content? Sound off in the comments section below…

Subscribe to Queerty for a daily dose of #life #outrage! #tumblr stories and more