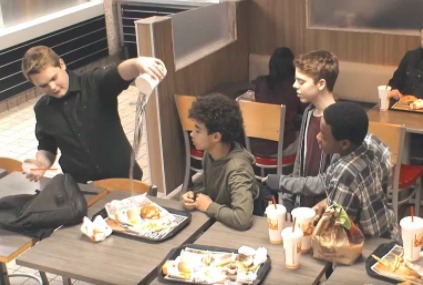 OK, we’re really not sure what to make of this new Burger King  anti-bullying PSA.

The ad opens with a group of middle schoolers taunting another kid–destroying his hamburger and hurling insults at him while nearby diners watch and do nothing.

In the second scenario, a Burger King employee “bullies” a Whopper Jr. then wraps up and gives out to various customers who all return to the counter to complain about the ruined hamburger.

So what exactly is the point of this bizarre social experiment?

Well, according to Burger King, 95% of people reported the “bullied” Whopper Jr., but only 12% spoke up for the bullied kid.

In other words: Burger King customers are much more inclined to stand up for a $3 ground beef patty than they are for an abused child. Way to go, guys!

But wait… wouldn’t a more accurate analogy (and we hesitate to even go here as the entire premise is fundamentally flawed) be to see if people care when someone else’s buger is “bullied”?

None of this makes any sense.

Burger King says in a statement:

Scrawny. Short. Ugly. Fat. Weird. 30% of school kids worldwide are bullied each year and bullying is the #1 act of violence against young people in America today (Source: nobully.org). The BURGER KING® brand is known for putting the crown on everyone’s head and allowing people to have it their way. Bullying is the exact opposite of that. So the BURGER KING® brand is speaking up against bullying during National Bullying Prevention Month.