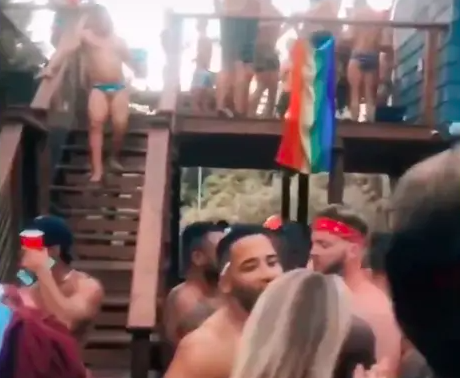 Despite being in the middle of a worsening pandemic that has, so far, killed 133,000 Americans and counting, thousands of revelers flocked to Fire Island last weekend to party, party, party.

Without a doubt, many of them will begin feeling the effects of their decision to ignore the advice of public health experts sometime in the next 14 days, which is the incubation period for COVID-19.

But at least one is already paying a steep price for his behavior.

Giancarlo Albanese will forever be remembered as the charming young man who partied on Fire Island over 4th of July weekend 2020 then posted photo to Instagram along with the caption: “F*ck Your mask. F*ck your social distancing. F*ck your vaccine. F*ck your eugenics. Kiss my a**hole if you think I’m an a**.”

Then, just to make sure as many people as possible saw his post, he also shared it on Twitter:

Because as it turns out, Giancarlo’s mother is reportedly immunocompromised and currently going through chemotherapy, and his father is still recovering from open-heart surgery, putting both of them at high risk for severe illness and possibly death should they contract COVID-19. Not only that, but Giancarlo lives with them.

Or rather, he lived with her until last weekend, when we was kicked out of the house.

A man claiming to be Giancarlo’s brother responded to his post by writing:

Find a new home because you’re not welcome at the one you currently live at. Complete disrespect for Mom & Dad’s lives, both who are very weak. Mom has chemo on Friday and you’re out doing this shit? Go live on your own and not under your parent’s roof where you can do whatever you like.

He also added that their father was still recovering from open-heart surgery, which he underwent last year. Then he threatened, “I’ll be standing at the door. He’s not walking through it.” 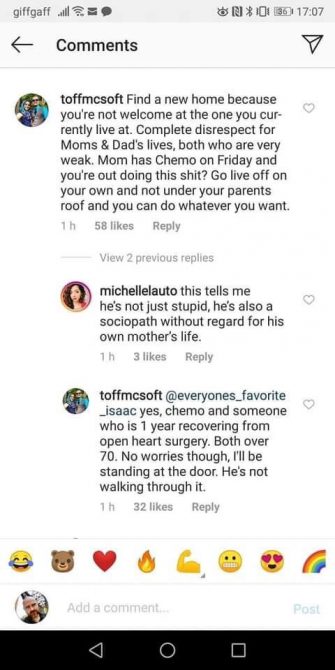 Twitter appears to be pleased with news of the eviction…

Sis is homeless now because he thought it would be cute to party in Fire Island in the middle of a pandemic and put his parents at risk 🤡 pic.twitter.com/Yfj4u3jm0M

Giancarlo Albanese (whose mom has cancer and chemo and in whose house he lives) thinks you, the public, are sheep… I guess he doesn’t yet realize that he’s the one getting shorn right now. #FireIsland #fireislandpines #COVIDIDIOTS pic.twitter.com/z9EyhwxM2q

Queerty has reached out to Giancarlo for comment. We will update this post if we hear back from him.