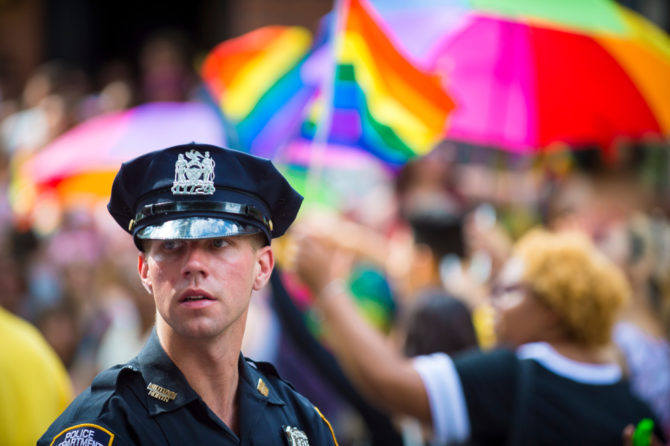 The city of Madison, Wisconsin will host its annual Pride parade this weekend, but don’t except to see any LGBTQ cops or firefighters marching in the streets.

Police officers have officially been banned from the festivities. The decision was made by OutReach LGBT Community Center has banned, who tells the Wisconsin State Journal that people felt uneasy about armed, uniformed officers participating in the parade.

Residents Shawna Lutzow and her fiancee Johana Heineman-Pieper cited concerns for people of color and other marginalized groups, if armed police officers were allowed to join the parade.

“We are not promoting police marching as a contingent, which is very different” from not allowing officers to march as plainclothes, unarmed individuals with other organizations or from attending the parade as a spectator, says Heineman-Pieper.

Lutzow adds that the decision to ban uniformed officers is a step in the right direction in making people of color and marginalized groups feel included in their community.

But not everyone is happy about it.

“There were some hearts broken (by OutReach’s decision), there were some tears shed, but we know there’s work that needs to be done and we want to take that on,” he said.

In response, the Madison Fire Department issued a statement saying it would skip out on marching in the parade as a show of “solidarity” with the police department.

Police will still be on site as security for Madison Pride. The OutReach LGBT Community Center has also invited plainclothes, unarmed officers to attend with their friends and families.