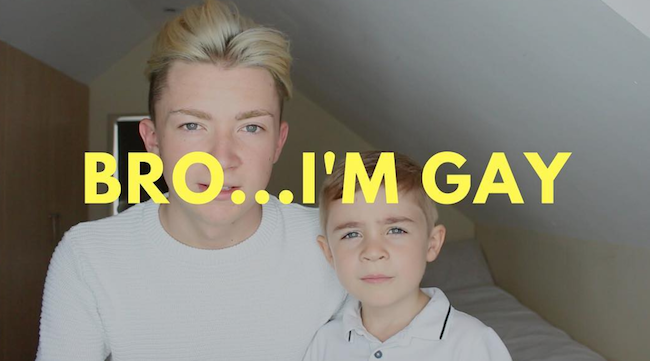 Oliver Potter, a popular YouTuber who goes by the name OliverVlogss on the channel, just released a video in which he tells his 5-year-old brother Alfie that he’s gay.

“Alf,” he begins, “The reason for this video is that I wanted to have a conversation with you. We’re going to talk about love.”

“How do you think about love? Do you think boy, girl, marriage, baby?”

“So,” his younger brother responds, “if you’re a mum and you want to be in love with a dad, you get in love with them.”

“If you marry a man, it’s going to be so cool because I saw in one movie, and in one movie a man was in love with another man and then everyone was saying ‘cool, cool, cool’… Love is love.”

“You’re so cute, you know that?” Oliver reeplies

“I wasn’t expecting such a mature honest answer,” he wrote later in the comments section.

“So you know that a man being with a man,” Oliver says, “they can’t have their own children, because only mummies can make the wish.”

“When you have a baby, you’ll get the ones who got lost,” Alfie replies. “Love means love. You can be what you want to be. There’s no room for hate.”

Brace yourself for major cuteness. Link in bio. Alfie taught me something filming this, love really is love. I'm so happy he is being brought up to be a respectful, kind young man and I wouldn't change him for the world. Stay happy everyone, there's room for all types of people in this world.

Excited by the outpouring of support the video’s received, Oliver later wrote:

“Sooooo much love in the air! Thank you to everyone who’s taken the time to watch this and comment and like it and share it haha. So Alfie wants his own channel ? WHAT HAVE I CREATED!

My brother’s reaction made me realize what a kind and gentle soul he is. He is right… Love is love, you really can be who you want to be you just have to pluck up the courage to make it happen. Remember, always stay true to yourself.”