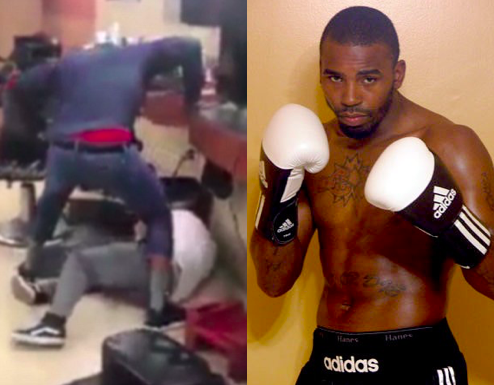 The 37-year-old father of 10, who came out two years ago, got into a physical altercation with another man at an LA Clippers barber shop in Philadelphia earlier this week and, of course, being the digital age, the whole thing was caught on tape.

According to TMZ Sports, a fight broke out between Mack and Hector Echevarria while Echevarria was getting a shampoo.

Echevarria had allegedly sent homophobic tweets to Mack from his Twitter account, which has been switched to private. Mack told TMZ that Echevarria “had it coming” after all the awful things he had said online.

Related: Shocking: Boxer Comes Out As Bi, Says He Wasn’t Drugged In Gay Sex Tape After All

But according to TMZ, Echevarria was undaunted by the assault, writing on Facebook shortly afterwards: “I rather have a video of some beating me up then a video of someone seeing me take a d*** up my a** any day.”

“Me and him gonna fight again,” he added.

See the video below. And remember, kids, violence is never the answer.