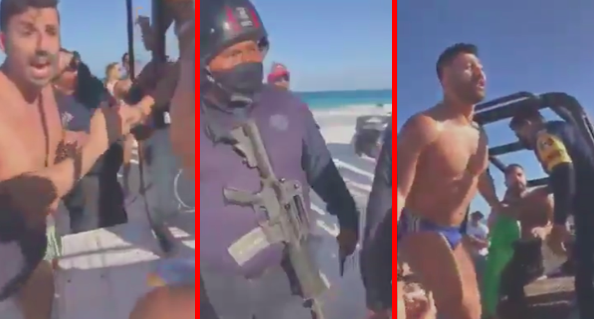 Disturbing footage of a gay couple being arrested by municipal police in Tulum, Mexico for kissing on the beach is circulating on social media.

Maritza Escalante first posted about the incident on TikTok. She and her friends were hanging out at the beach when the scene erupted.

“The officers approached a group of young foreigners,” she recounted in her video. “After about 20 minutes passed, a patrol car arrived and proceeded to arrest them with handcuffs.”

When Escalante went over to find out why the men, who have not been identified, were being handcuffed, she was shocked to learn it was “because they were gay and they kissed.”

Video of the arrest shows other beachgoers gathering around the couple as they’re being arrested and shouting, “They aren’t committing any crimes!” and accusing officers of being homophobic.

Eventually, officers gave into the pressure from the crowd and released the couple.

According to Out Right International:

Mexico has made progress on LGBTIQ issues; however, there are still barriers to full LGBTIQ equality. In 2010, same-sex marriage was legalized in all states but one (which recognizes same-sex marriage established in the rest of the country), and discrimination on the basis of sexual orientation was banned. Further protections for LGBTIQ people vary depending on the state. Several states have adopted laws permitting same-sex couple adoption and the right to legal gender recognition.

The social conditions of LGBTIQ people are also variable across the country. In large cities and states with progressive government officials, LGBTIQ people’s human rights are protected and there are legal ramifications for acts of anti-LGBTIQ violence. However, in states with conservative government officials, anti-LGBTIQ hate crimes occur with impunity.

The Catholic Church significantly impacts social and cultural norms around gender and sexuality, and several anti-LGBTIQ Catholic groups oppose legislation striving for full equality for LGBTIQ people. Despite these challenges, LGBTIQ Mexicans are experiencing greater and growing acceptance and visibility, particularly in urban centers and among younger generations.