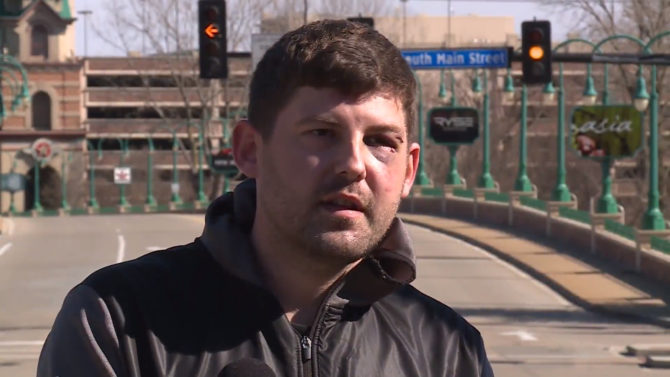 A gay couple in Missouri has gone public with a weekend ordeal that left both bloodied and in need of hospitalization. As the couple walked outside the Ameristar Casino in St. Charles, a group of men attacked them while yelling anti-gay slurs. Investigators in the case have yet to rule it a hate crime.

The names of the victims have not been released to the media, though one victim, a 29-year-old man, did agree to speak with local Fox affiliate Fox 2 on the grounds that he remains anonymous.

“I think about it a lot, especially with my boyfriend. He took a real beating for no reason,” the victim told Fox 2. “It felt pretty helpless. It was pretty scary.”

Related:  His attackers yelled “f*ggot” as they beat him. Cops say it’s not a hate crime.

He went on to describe leaving the casino around 1:30am on Saturday. His boyfriend had a bit too much to drink, and one victim had his arm around the other to help him walk as the pair exited the casino into a parking garage. Along the way they passed another group, where one man made a punching motion toward them.

“They saw me with my arms wrapped around him and that’s why they did that [hitting] motion and said [anti-gay slur],” the victim told reporters. “Obviously, when they said that, everything after that was out of hate, so it’s clearly a hate crime.”

The victim then confronted the man in question, at which point at least two men began beating him and his boyfriend. The victim in question suffered a fractured nose and eye socket; his injuries will require surgery. His boyfriend was knocked unconscious and will lose several teeth from the ordeal.

Surveillance cameras in the parking structure did capture at least part of the attack on video. Even so, police investigating the case are reluctant to rule the incident a hate crime.

“There’s a dispute as to what type of language was used back and forth,” Lieutenant Tom Wilkison, St. Charles Police Department said in a statement. “At this time, we don’t have anything to support that the two people got beaten up or targeted because of their sexual orientation.”

Under Missouri law, should investigators determine the crime was motivated by the victim’s sexual orientation, the charges in the case will elevate to a Class D felony, punishable by four years to seven years in prison.

The Ameristar Casino, for its part, has cooperated with the investigation and released a statement reassuring visitors that the security of its guests is the casino’s highest priority.

“How do we go anywhere and feel safe if we get attacked there, especially someplace like Ameristar, who should have top-notch security? If it happens there, it could happen anywhere,” the victim said.