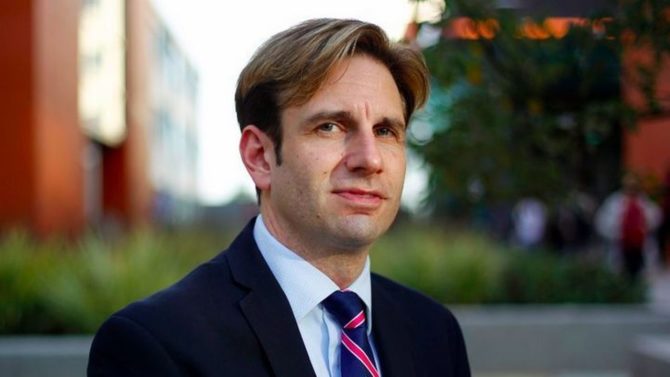 Joseph Sabia is a well-regarded economist and professor who teaches at San Diego State University. This week, he was called by Republicans in Congress to speak about the effects of raising the minimum wage to $15 an hour.

Everything was all set to go… until a blog post written by Sabia in 2002 in which he advocated for taxing “homosexual acts” surfaced.

The post was titled “Tax Gay Sex” and appeared on the site “No Shades of Gray,” which was billed as “The Ivy League’s Premier Conservative Column.”

In it, Sabira wrote:

Homosexual activity has been responsible for devastating health outcomes–deadly HIV, hepatitis B, and various other sexually transmitted diseases.

When two random men get together and choose to have sex, there is not an insignificant risk of infection and death. And if these infected men then go on to have sex with women, then you have women–and possibly children–who will be stricken with AIDS.

In another post titled “College Girls: Unpaid Whores,” Sabia raged about loose women who have sex “when they feel like it” and said gay men are to blame for straight people’s promiscuity:

It should surprise no one that sexual activity has historically been more frequent among gay men than among heterosexuals. This is because there is no civilizing female force in the gay community.

Whenever men want to have sex, they just go ahead and do it. Neither of the partners has much of an incentive to refrain from sex since monogamous relationships and traditional families are generally not the final goals of these partnerships.

Recently, the behavior of young heterosexuals has begun to resemble that of gay men because young women are imitating men in their sexual promiscuity.

To add a level of absurdity to the whole thing, Sabia is openly gay.

In a statement to Politico, he says he wrote the blog posts in college and that they were meant to be satirical.

“I regret the hurtful and disrespectful language I used as a satirical college opinion writer,” he writes. “As an out gay man in a long-term committed relationship… accusations of homophobia stemming from college nonsense I wrote nearly 20 years ago are hurtful to my family today.”

We get it. We’ve all said and done things in our pasts that make us cringe today. But Sabia’s old blog posts read a lot more like self-hating homophobia than satire, if you ask us. Even by 2002 standards.

After Sabia’s post surfaced, Republicans decided to delay his testimony, which was probably a wise move. But in an interview with CNBC, Rep. Mark Takano, the ranking Democrat on the House Education and the Workforce Committee committee, said it was an “absolute shame and a disgrace” they ever invited him as a witness in the first place.

“Instead of simply postponing this hearing, which would have been the first hearing on the federal minimum wage that Republicans have held in eight years, my Republican colleagues on the Committee should have issued a strong rebuke disavowing this witness and let the hearing go on,” Takano said.

Meanwhile, San Diego State University rushed out a statement distancing itself from Sabia’s comments and affirming the university “unequivocally rejects any sentiment which seeks to undermine or devalue the dignity of any person based on their gender, orientation, ability, or any other difference among people which has been an excuse for misunderstanding, dissension or hatred.”