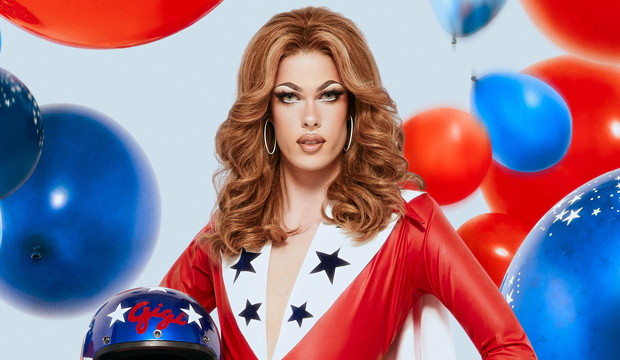 Bio: After being exposed to LGBTQ+ culture at age 12 by an openly gay uncle, Gigi honed the art of drag throughout their teen years before attending Millikin University and earning the school’s David S. Monroe Art Award, which honors “outstanding achievement in art.”

They elaborated later in the episode: “I’ve kind of always teetered between male and female throughout my whole life,” they said in the Werk Room. “Growing up, I’ve always been interested in feminine things. I wanted to wear dresses to school.”

How Their Family Grew: Gigi’s mother, costume designer Kristi Geggie, not only fostered their drag aspirations but helped Gigi craft gagworthy looks before their big break on Drag Race. “At age 16, me as a new drag queen didn’t quite know how to put things together, and my mom would be see me walk out the door and be like, ‘Oh. No, no. No. Let’s go back downstairs and find a different glove for you,’” Gigi told IndieWire in February.

Gigi praised their mom on Instagram this May, writing: “I want to start by saying thank you for giving me a childhood that I will never take for granted. For allowing me to discover my own identity, for realizing who I was meant to be and feeding the flame, and for bribing me with various dolls to audition for children’s theatre every summer. I don’t have a clue what I would do or where I would be if I didn’t have you in my life.”

In a Vulture interview that same month, Geggie fessed up to the doll ploy. “I did buy an American Girl doll as a bribe, for her, to get her to audition [for Woodstock Children’s Summer Theatre],” she admitted. “But in terms of having a drag daughter, I didn’t know what drag was. And when Gigi started doing it, I was really not sure. … But I’m on board. I’m totally on board now. I’ve always been very supportive of Gigi, and Gigi Goode, but I never paid any attention to drag until her.”

“Miss Goode is marching through, and she’s got shit to do. No time to doubt myself, gotta put that on the shelf. Had to open up and live out loud, so I could make my mama proud. Baby I can see the light, so Imma kiss my fears goodnight!” – Gigi Goode, performing in RuPaul’s Drag Race’s “Losing Is the New Winning”