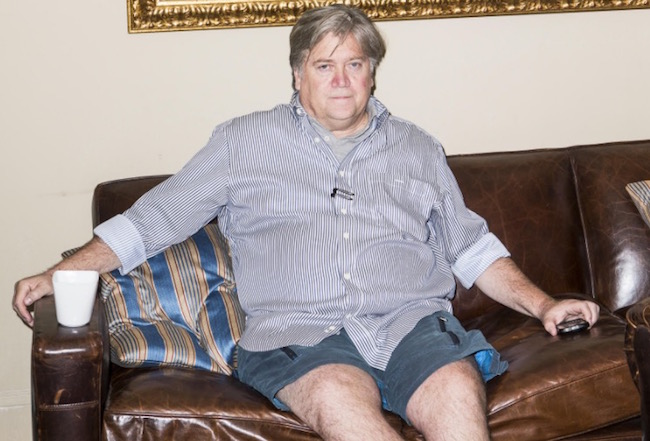 “We don’t want to be mean to gays; we want to expose them when they’re being bullies.”

That’s the gist of a decidedly unhuggy Buzzfeed story examining Steve Bannon’s views on homosexuality, in which a Breitbart writer claims Trump’s chief strategist “isn’t out to promote a socially conservative agenda on homosexuality… but he does have an interest in attacking LGBT-rights advocates as a way of attacking the left.”

But Bannon’s and Breitbart’s criteria for when gays are “bullies” is uncomfortably far-reaching.

And Bannon has remained on the sidelines as a strategy. (The same can’t be said for transgender rights, which Breitbart regularly opposes in the harshest of ways.)

“I don’t think [Bannon] has very strong views on the question at all … I mean gay rights broadly,” says Thomas Williams, Breitbart’s editor in Rome.

“Probably pushed to it, he would probably say I think it’s gone too far, but he never pushes it, he never vocalizes it — it’s just not on the top 10 list of things that he cares about….

It’s just not one of the issues where he’s going to go to the mat. Regardless of his personal inclination on the issue … you have to pick your battles and it’s just not worth it.”

According to close confidant Benjamin Harnwell:

“I’d say that Steve Bannon … [is] always looking internationally to people that he can work with where there is mutual common interest. He was interested in amplifying the voice of a leading conservative…. I don’t think he wants to wade into (infights).”

Another contributor, the Catholic conservative activist Austin Ruse, says Breitbart’s stance is to attack LGBTQ activists (who they’ve branded the “Big Gay Hate Machine“), but not to get into fights about homosexuality itself:

“The thing about Breitbart and LGBT — and this was discussed — we don’t want to be mean to gays; we want to expose them when they’re being bullies.”

“The big mission at Breitbart is to change the liberal narrative… (not) going after gays per se.”

If their strategy still eludes you, here’s an example.

The very first story Ruse pitched to Bannon centered on Matthew Shepard, who, after his brutal murder in 1998, remains a symbol of antigay violence.

Related: Trump’s Campaign Staff May Be The Most Homophobic Ever

The pitch: Shepard, who was tied to a fence and beaten to death, wasn’t the victim “The Big Gay Hate Machine” wants you to believe he was.

Bannon rewarded the story idea with his highest praise: “HUGE.”

In the published post, Ruse claims “almost everything you think you know about the Matthew Shepard narrative is false.”

Leaning heavily on a sketchy book verging on publication, Ruse insisted Shepard had had sex with one of his killers, and was murdered due to a drug-related skirmish.

He claims the “victim” narrative was dreamed up by “the gay establishment,” and says “the agenda of the sexual left lives on lies.”

According to Angelo Carusone, president of Media Matters for America, a progressive media advocacy group:

“When it comes to issues of anti-Muslim sentiment there’s no confusion it’s 100% clear, but where LGBT issues come up, it’s a bit murkier.”

He says that while the site consistently suggests “gay culture is icky and gross and weird,” it’s “not picking up big policy fights” over homosexuality.

“When it comes to gay rights, they seem to have internalized [conservatives’] own defeat.”

In fact, Bannon could even invoke gay rights issues if it helps bolster one of his pet issues, such as stopping immigration.

As Buzzfeed points out, at the very last minute, some language was tacked onto an executive order that aimed to limit refugees entrance into U.S. from seven Muslin countries:

“The United States should not admit … those who would oppress Americans of any race, gender, or sexual orientation.”

In fact, gay Republican activist Chris Barron, a Breitbart contributor and leader of GOProud, a gay convervative group, consider’s Bannon an ally to the gay community:

“I’m not concerned about Bannon at all,” he says, clearly not representing the larger LGBTQ community.