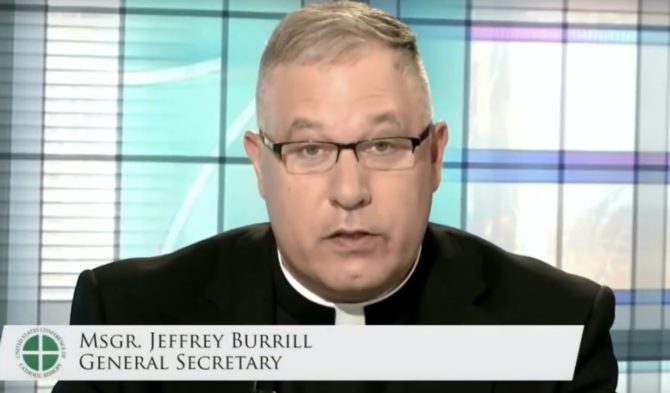 Another day, another Catholic priest busted on Grindr. And by the sounds of it, there may be more to come in the very near future.

Msgr. Jeffrey Burrill abruptly stepped down from his post as general secretary of the U.S. bishops’ conference this week following allegations of “possible improper behavior.”

In a hasty statement issued earlier today, Archbishop Jose Gomez, president of the U.S. bishops’ conference, announced that Burrill, who is, er, was one of the highest-ranking American cleric who is not a bishop, had resigned effective immediately.

“On Monday, we became aware of impending media reports alleging possible improper behavior by Msgr. Burrill,” he wrote. “What was shared with us did not include allegations of misconduct with minors. However, in order to avoid becoming a distraction to the operations and ongoing work of the Conference, Monsignor has resigned effective immediately.”

Within a few hours, the “impending media reports” were published and they include claims that Burrill has been spending an awful lot of time chatting with guys on Grindr, visiting unfamiliar neighborhoods, hanging out at gay bars, and going to at least one gay bathhouse during a trip to Las Vegas.

[An] analysis of app data signals correlated to Burrill’s mobile device shows the priest also visited gay bars and private residences while using a location-based hookup app in numerous cities from 2018 to 2020, even while traveling on assignment for the U.S. bishops’ conference.

According to commercially available records of app signal data obtained by The Pillar, a mobile device correlated to Burrill emitted app data signals from the location-based hookup app Grindr on a near-daily basis during parts of 2018, 2019, and 2020 — at both his USCCB office and his USCCB-owned residence, as well as during USCCB meetings and events in other cities.

To add an extra layer of irony to the situation, one of Burrill’s responsibilities as general secretary of the U.S. bishops’ conference was to help manage the church’s response to sex scandals and clerical cover-ups, which he did while allegedly engaging in some secret sexual shenanigans of his own.

Now, just in case you’re wondering how The Pillar got its hands on Burrill’s data and whether that’s even legal, it is.

Signal data is collected by apps after users give their consent. It then gets aggregated and sold by data vendors. The Pillar acquired the information about Burrill through a third party that had tracked his device.

Equally shady, of course, is a Catholic priest who has taken a vow of celibacy and preaches that homosexuality is a sin allegedly hooking up with men on the DL and hanging around gay bathhouses in Sin City.

Burrill has not commented on the scandal and it is not yet known whether he’ll face canonical discipline. But a report by the Catholic News Agency hints that his story may be the beginning of a much larger scandal to come.

The outlet said it received a tip from someone claiming to have access to surveillance information about multiple priests on dating apps, adding that “there are reports this week that information targeting allegedly active homosexual priests may become public.” It did not mention Burrill specifically, however.

The U.S. government’s widespread use of surveillance technology to monitor individuals has been widely known since the 2013 revelations of former National Security Agency contractor Edward Snowden.

And while there are reports of private corporations using similar techniques to keep track of employees, this is thought to be the first proposal to apply such measures in the Church.