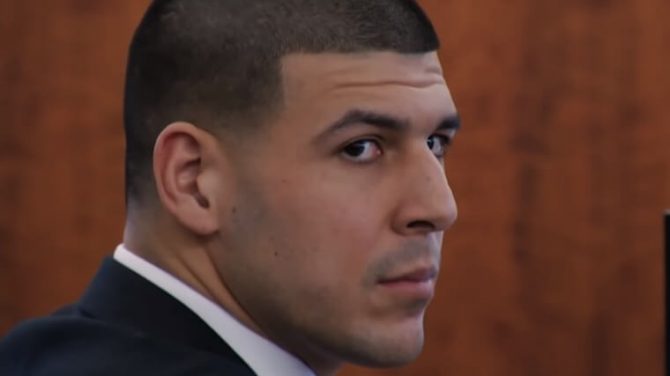 The Rabbit Hole: Killer Inside – The Mind of Aaron Hernandez

Aaron Hernandez loved making headlines, though he probably didn’t intend to make as many as he did. As a player in the NFL, his good looks and aggressive style on the field made him a darling of the sports world. Then, in 2013, he incited shock for his arrest for the murder of Odin Lloyd, allegedly as part of a drug deal gone bad. During Hernandez’s trial for the murder of Lloyd, prosecutors indicted him for the murder of two other men in 2012. Rumors began to circulate that Hernandez was either bisexual or a closeted gay man and had several prison lovers. Then, he shocked the world again by committing suicide in 2013.

Killer Inside: The Mind of Aaron Hernandez recaps the life and career of its eponymous figure, and offers a disturbing look into his decaying psychology. Featuring interviews with teammates, childhood friends, relatives and even his lawyers, the Netflix series addresses the rumors about Hernandez’s sexuality definitively. It also offers at least anecdotal evidence that a combination of toxic masculinity, homophobia, insecurity and brain damage made a possible sports star into a violent time bomb. Yet beyond the tabloid fascination, beyond the courtroom detail, Killer Inside features a moment of unexpected tenderness: an admission of a son’s queer identity to his father, and a father’s emotional apology for his unwitting creation of a homophobic environment. In a story of despair, it gives us hope.

Subscribe to Queerty for a daily dose of #entertainment #dailydose #killerinside:themindofaaronhernandez stories and more