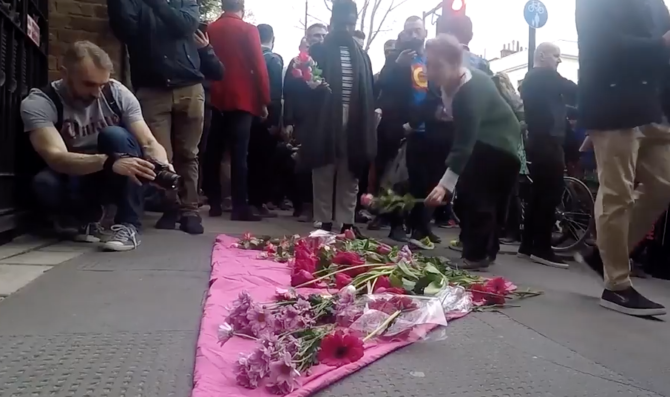 Amid the horrifying reports of gay men being rounded up, tortured and killed in Chechnya, hundreds have gathered in protest outside the Russian Embassy in London.

Men who have escaped have detailed rooms holding 15-30 prisoners each where starvation, electric shock torture and fatal beatings are the norm.

Meanwhile, All Out and the Russian LGBT Network have launched a joint fund-raising campaign to help victims and to get the remaining homosexual men out of the region.

“What is happening in Chechnya is outrageous. Our priority now is to help get as many people as possible to safety, before it’s too late,” said Matt Beard, Executive Director at All Out. “Our team is doing everything possible and impossible to achieve that. And we want Russian officials to intervene, to stop the killing and to start proper investigations. There are no excuses for silence when people are being kidnapped, tortured and killed,” added Svetlana Zakharova, Communications manager at the Russian LGBT Network.

Crime Russia describes the awful business of how men have been targeted:

LGBT people were caught with the use of set-ups, when personal ads were posted on social networks luring homosexual people. Those who responded were kidnapped and tortured. They were forced to turn in other gays they knew, then the authorities detained every men they saw in the phonebook. The first-wave detainees were released one by one in January, after that many left the republic. However, a month later, a second wave of repression began and was even bigger, sometimes going so far as to kill the men.

Below, video of the London protests: