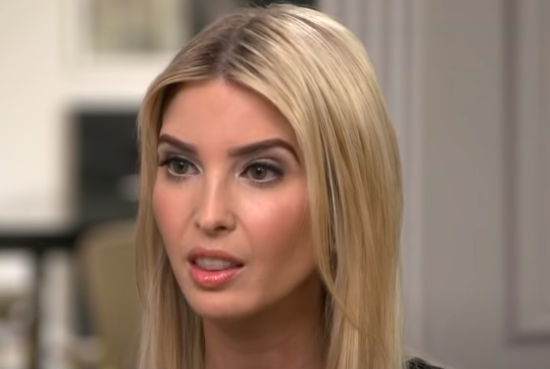 They say the road to hell is paved with good intentions. But in Ivanka Trump‘s case, that road is paved with grifts, oatmeal, and self-congratulatory videos posted to social media.

On Sunday, she posted a video on Instagram crowing about her generosity, saying she and her partner organizations had made good on that promise, before addressing the people living in the war-torn country directly.

“You are in our thoughts and our prayers, and our heart breaks for what you are experiencing in this dire time,” Ivanka said. “You have inspired the world with your courage and bravery as you fight for your country and your freedoms.”

In the video, Ivanka didn’t mention anything about how, as president, her father often parroted Kremlin talking points, excused and sometimes even embraced Russian aggression, and fawned over Vladimir Putin.

She also didn’t mention how her dad was impeached (the first time) for threatening to withhold military aid to Ukraine if it didn’t supply him dirt on Joe Biden prior to the 2020 presidential election.

Ivanka followed up the video with another post sharing photos of recipients of the meals, along with the caption, “Our meals, sent with love and prayers, arriving in Kyiv.”

While it’s nice of Ivanka to want to help, most people would agree that boasting about her own altruism on Instagram during a humanitarian crisis caused by one of her father’s favorite murderous dictators is in pretty poor taste.

Related: Wow, Ivanka’s food box program was an even bigger grift than we ever could have imagined

Furthermore, the International Business Times reports Ivanka donated “hundreds of thousands of dollars” of the reported $640 million she made while working in the White House to the effort and that most of the food was packages of “oatmeal and goulash.”

My takeaway from Ivanka Trump’s video on donating meals to Ukraine.

“Look at me guys! I’m a real humanitarian that cares for other humans! This video will help the public‘s perception of me!”

People that are truly charitable don’t need to advertise it in a video.

Ivanka trump said nothing when her daddy/husband bragged about sexual assault.
He let Covid ravage the country.
He extorted Ukraine.
He plotted a coup.
He incited a deadly insurrection.
And. She. Said. Nothing.
So I don’t give a flying fuck about anything she has to say now.

that’s all I’ve got to say to @IvankaTrump on that pic.twitter.com/deHVgByhoO

No, Ivanka did not send a million meals to Ukrainian refugees. Trumps don’t do anything that doesn’t benefit them. Next

Ukraine, I have 1 million meals but I need you to do us a favour though!

Is Ivanka trying to start a reputation rehabilitation tour?

Is she expecting praise for what she claims she's done for the Ukrainian people?

These Trumps just think they're so special.

This crime family should be in prison.

Up next on @CBSNews – new contributor and former Trump campaign chairman Paul Manafort discusses the war in Ukraine.

And then, new contributor Ivanka Trump will discuss nepotism in government.

I wonder if Trump hadn’t tried extort money from Ukraine and handed them to Russia, if this war would even be going on.

Shout out to Ivanka Trump for donating a sliver of her fraudulently gained American funds, to the children of Ukraine. What a gal, great PR job, well done ? #Ivankaslapher #TrumpCrimeFamily pic.twitter.com/Bf96gGPf10