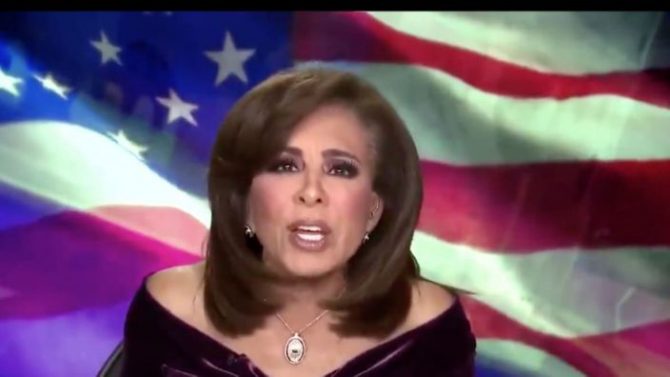 Fox News anchor Jeanine Pirro had a minor on-air freakout over the weekend when she ripped into Attorney General William Barr, calling him a “reptile” for saying the 2020 election wasn’t rigged, despite Donald Trump‘s false claims to the contrary.

Pirro, who reportedly vied for the attorney general position before Barr landed the gig in 2018, was pissed at him for announcing that he hasn’t seen any evidence of widespread voter fraud.

“Really? It’s curious Barr, the head of the DOJ, would affirmatively make a statement regarding a pending investigation,” Pirro, who may or may not have been drunk on pinot grigio, snarled at the top of her show.

“As a former prosecutor for over three decades, I and virtually everyone similarly situated, know that DOJ guidelines do not allow comment on investigations.”

As she continued on with her rampage, she grew more and more irate, before eventually she couldn’t seem to hold back any longer.

“We need answers! We need action! We need justice!” she seethed. “And you Mr. Barr are so deep in the swamp, you can’t see beyond your fellow reptiles!”

Later in the hour, Pirro had on pardoned treasonist Michael Flynn, who recently called for a military coup to keep Trump in power, to discuss why governors across the country shouldn’t certify their state’s election results.

And now, some responses to the whole sh*tshow…

When does she throw her martini in our faces?

This is 80’s Dynasty cheesy-script drama, but without the excellent acting.

Barr, gurl you so deep in the swamp
Where the woods are dark, lonely, and deep
In your Thighland the reptiles sleep

Not to mention she’s a serious alcoholic. Someone that shows up to work drunk, numerous DUIs. She has some serious problems that Fox is just enabling. It’s not going to be a very good end of life story for her.

I was trying to figure out what she was wearing…silly me, it must be a cocktail dress 😂🍸🍸🍸🍸🍸