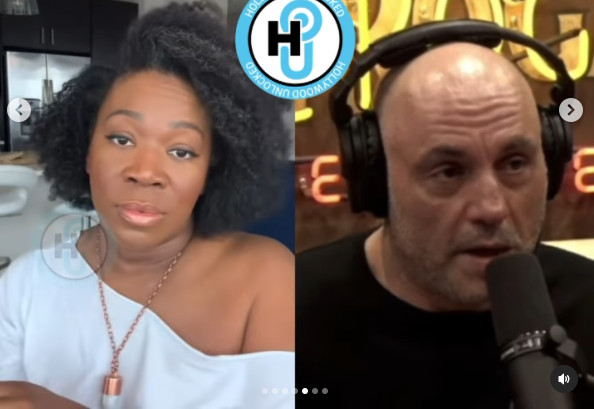 The blowback over podcast host Joe Rogan continues, as singer/podcast host India Arie has elaborated on the reasons she’s pulled her music and podcast from Spotify.

Arie joined fellow musicians Neil Young, Joni Mitchell and Graham Nash, as well as fellow podcast host Mary L. Trump in pulling her music and podcast from Spotify. The group has said publicly that they’ve done so in protest to the platform’s continued support of Joe Rogan and his spread of COVID-19 misinformation.

Now, Arie wants the world to know, that COVID-19 misinformation was not the only issue she had with Rogan.

Arie posted a lengthy video to Instagram to address her fans, the controversy, and to emphasize another issue she has with Rogan: his use of racist language.

Arie begins the video by showing a clip of Rogan referring to a heavily black neighborhood as “Planet of the Apes.” She then clarifies her own stance to her followers.

“I empathize with the people who are leaving for the COVID disinformation reasons,” Arie adds. “And I think they should. I also think that Joe Rogan has the right to say what he wants to say. I also think that I have the right to say what I want to say. So as an artist…Spotify is built on the back of the music streaming. They take the money built from streaming and pay this guy $100 million but pay us .003% of a penny.”

Arie then goes on to show an extended series of clips of Rogan using the “n-word” in his broadcasts. He says it over and over.

“I want to be clear where I stand on this, in no uncertain terms,” Arie explains. “He shouldn’t even be uttering the word. Don’t even say it, under any context. That’s where I stand.”

Arie then addresses Spotify itself.

“We have this person who is offensive to a lot of people and is paid $100 million,” she notes. “The backbone of Spotify is the music. You pay the musicians .003-.005 percent of a penny and take this money generated over here and use it to invest in this guy? Do you what you want, but take me off. Or pay me too. I mean us. Pay artists like me too. Pay podcasters of color too.”

She then posits another idea. “What if we all leave? Then we can start having a conversation.”

The past few weeks have seen Spotify come under mounting pressure over Rogan’s show, as 270 medical professionals demanded in an open letter that the streaming giant address Rogan’s spread of COVID-19 misinformation. Spotify has responded by announcing it would add content warnings to certain podcasts dealing with COVID discussion. Rogan himself has apologized, though that hasn’t stopped a growing number of musical talent–including Arie–from pulling their own music in protest.