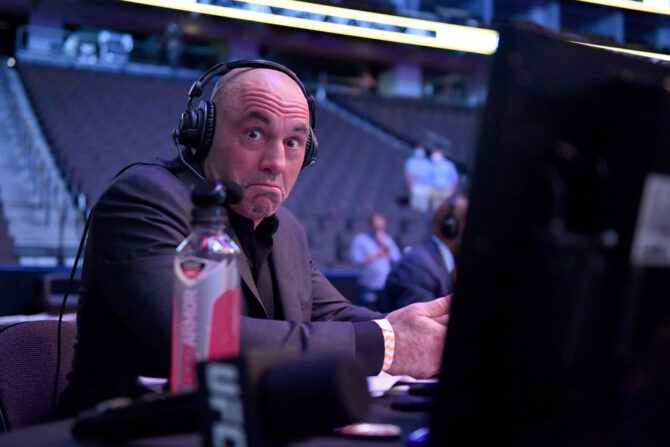 Joe Rogan is doing serious damage control after Spotify announced it would be adding content warnings and disclaimers to certain podcasts after two musical legends pulled their music from the platform in protest of the shock jock.

Both singers survived polio as children and take a hard line against any anti-vaccine rhetoric.

Last week, reports also emerged that Barry Manilow would join Young in pulling his music from Spotify, though the singer dispelled that rumor over the weekend.

In response to Mitchell and Young, Spotify CEO Daniel Ek released a statement over the weekend saying that the platform would begin to add disclaimers and content warnings to podcast episodes about COVID-19.

Though Ek’s announcement didn’t cite Rogan by name, no other podcast on the platform has come under the same amount of criticism for the spread of false information regarding the virus.

That same day Elk released the statement, Rogan took to Instagram to issue an apology of sorts to both musicians, saying he felt “very sorry” to have offended them.

“I most certainly don’t want that,” Rogan said in response to Young and Mitchell pulling their music from the platform.

He went on to claim that what he says on his podcast is “not that prepared or fleshed out” and thanked Spotify for “being so supportive during this time and I’m very sorry that this is happening to them.”

“If there’s anything that I’ve done that I could do better, it’s having more experts with differing opinions right after I have the controversial ones,” the host said.

Regarding disclaimers being added to his show, he admitted: “I would most certainly be open to doing that. And I would like to talk to some people who have differing opinions on the podcasts in the future. I do all the scheduling myself and I don’t always get it right.”

“I don’t know what else I can do,” he concluded.

He’s hosted a number of medical “experts” who have claimed the COVID-19 vaccine is ineffective against the virus, and that the dangers of the pandemic are overstated to control the public.

He also promoted the use of ivermectin as a treatment for the virus, which has been proven ineffective and even dangerous.

In response to Rogan’s misinformation, 270 scientists, professors, doctors, and healthcare workers penned an open letter earlier this month calling on Spotify to take action in curbing the spread.

In addition to Neil Young and Joni Mitchell’s actions, Prince Harry and Megan Markle released a statement citing their concerns over COVID-19 misinformation being spread on Spotify, though the two did not mention Rogan by name. The pair have a reported $25 million deal in place to produce podcasts with the steaming giant.

Last week, Spotify’s stock plummeted. The company has almost 25% of its value so far in 2022.