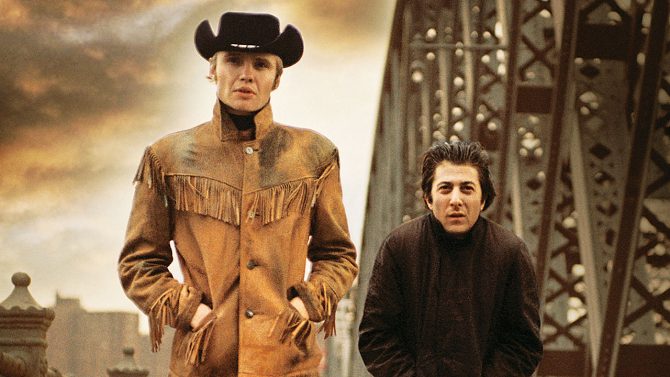 Director John Schlesinger came out to the world (well, kinda) with this gritty drama about New York street hustlers dreaming of a better life. Some critics have hailed Midnight Cowboy as a seminal queer classic. Others have labeled it one of the most homophobic movies ever made.

The story finds the naive Texan Joe Buck (Jon Voight) arriving in New York City to live the high life…as a low rent male prostitute. Upon arrival, he crosses paths with the ragged street man Ratso (Dustin Hoffman) who first cons him before offering to act as an advisor and surrogate pimp. A strange bond develops between the pair as they begin to dream of a life outside the city in the idyllic tropics of Maimi.

Midnight Cowboy remains the only X-Rated movie to win the Oscar for Best Picture. Schlesinger, likewise, took home the trophy for Best Director. Contemporary critics read the film as a gay romance, and Schlesinger unquestionably views Joe and Ratso through a queer lens. That said, modern appraisal of the film both lauds it for its portrayal of a same-sex relationship (albeit a chaste one) and deride it as a homophobic nightmare. In all honesty, we can see it both ways: Joe and Ratso do have an odd devotion to one another, and Joe does seem to take easily to servicing male clients. On the other hand, the Joe/Ratso coupling has all the hallmarks of a dysfunctional relationship, and flashback scenes of Joe getting raped could imply that he isn’t gay; rather, he’s trying to cope with sexual trauma.

In any case, we recommend Midnight Cowboy both as a historical artifact, and as a controversy which invites debate. Where do you fall in the appraisal? Watch and find out.