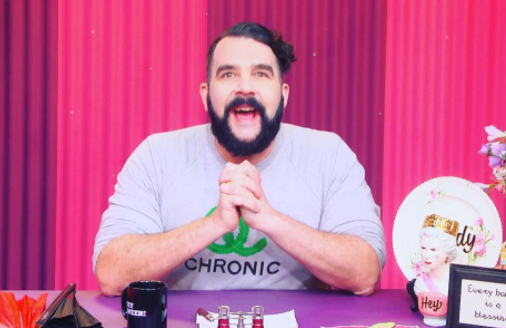 Jonny McGovern is the utterly fabulous host of “Hey Qween,” your one-stop shop for all the drag glitz, glamour, drama and shaaaade. Jonny has also released three studio albums under the name The Gay Pimp, which include such classics as Sexy Nerd, Dickmatized and #TOTDF.

I’ve just finished editing all the episodes of Hey Qween and Hot T for this season which will be airing through August. The entire team works our asses off and I’m super proud of what we’ve accomplished this season including hitting 100k subscribers. In July I’m going on tour with my favorite Hey Qween guest of the season, the incredible Dita Von Teese, as the host of her The Art Of The Teese Tour which is obviously a super glamorous dream.

Describe your first pride for us.

I didn’t really experience Pride until I moved to NYC. It was so huge and exciting. There’s nothing like the energy of NYC’s gay pride parade. But it was the time AFTER the parade that was my favorite part and remains my favorite. Everyone is in a good mood, milling around, all the letters of the gay rainbow with a feeling of togetherness. I love it.

Definitely one of my first prides when I drank too much and had to throw up in a garage can on the corner in the West Village. Not the height of glamour.

Spilling the T in my new @marekrichard tee

A post shared by Jonny McGovern (@jonnymcgovernisyourdaddy) on May 4, 2017 at 6:57pm PDT

More than ever there’s a balance to be struck. With all the shit going on with President Cheeto and his Legion Of Doom it seems like maybe it’s not the time to party for Pride. Time to dust off the pink triangle and have some militant ACT UP style aggressive demonstrations. But when I travel around the country I can really see that people NEED to be able to come together to celebrate ESPECIALLY with everything going on.

Pride (A Deeper Love) of course. Either the original with Deborah Cooper or the Aretha Franklin version. Preferably every mix ever made played back to back all weekend.

A Rainbow Hey Qween x Hot Topic Tshirt (Available at hottopic.com) purple sparkle timbs and a fan that says YAAAAAAS when you snap it open. You know… classy.