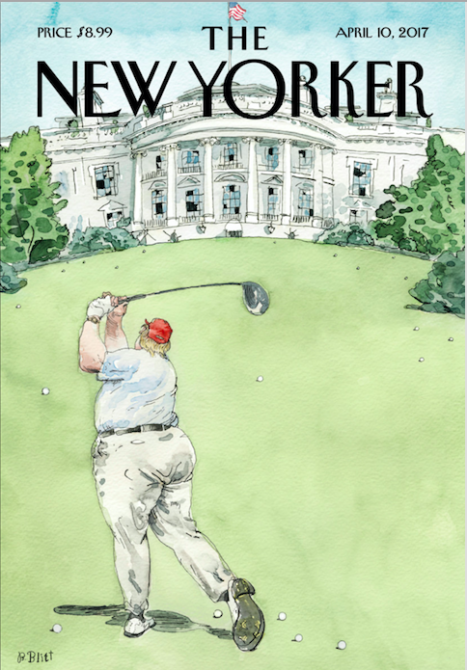 The latest cover of the upcoming New Yorker issue has been released, and it’s is a none-too-subtle shot at Trump’s first few months as leader of the nation.

Accompanying a story called “Broken Windows,” the cover image depicts the president decked out in his golf clothes, firing off shots form the South Lawn at the White House, breaking many a window in the process.

Not only that, Trump himself is characterized not as the strong, wise leader he so desperately wants people to think he is, but rather an overweight schlub whose respect for the office in which he serves is about on par with his shoddy aim.

After repeatedly criticizing former President Obama about his golf games, Trump has visited his own golf courses an incredible 13 times since taking office in January.

“I see that the word ‘duffer’ is defined as ‘a person inexperienced at something,’ especially at playing golf. That’s the word that comes to mind as I watch President Trump ploughing one drive after another through the glass windows of American politics,” cover artist Barry Blitt said of his work.

Combine this with Time’s choice to go with three words — “Is Truth Dead?” — instead of an image of the president on its recent cover, and we can certainly expect to hear about the failing @TIME and failing @NewYorker any moment now.

Related: Donald Trump has an awfully strange poker tell, and there’s video to prove it