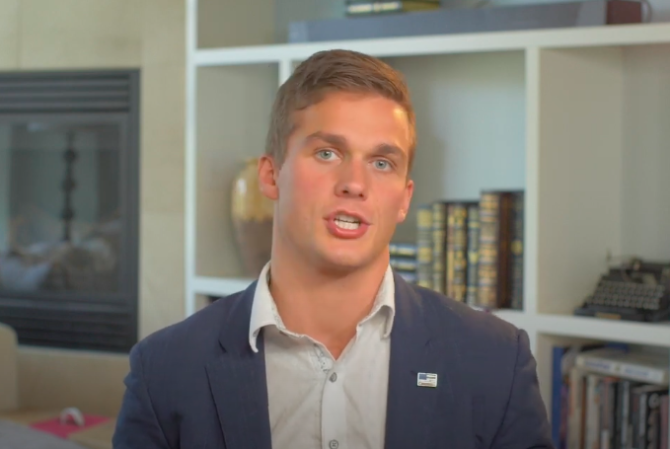 Accused sexual predator Rep. Madison Cawthorn of North Carolina has barely been a member of Congress for three months and he’s already facing a historically high number of 2022 challengers.

So far, five Democrats and one Republican have revealed plans to unseat the 25-year-old Nazi enthusiast in next year’s midterm, which is still 19 months away, making it the largest challenger field any incumbent from Cawthorn’s district has ever seen at this point in an election in over 20 years.

Among those vying for his seat is Jasmine Beach-Ferrara, an openly lesbian Christian minister and mother of three who was the first Democrat to throw her hat into the ring back in early March, exactly two months after Cawthorn was sworn into office.

I’m Democrat Jasmine Beach-Ferrara and I’m running against Madison Cawthorn. As a gay woman, Christian minister, mom of 3, I’ve heard “you can’t” all my life. I’m ready to prove the skeptics wrong again. Please retweet and ask everyone you know to follow this account to join us. pic.twitter.com/dJroXf3bWf

Democrats who will compete in their own primary for the right to face Cawthorn include two ministers: nationally prominent LGBTQ activist and Buncombe County Commissioner Jasmine Beach-Ferrara and Elementary school principal Eric Gash, a Hendersonville High School football standout and the lone Black candidate in a district that is 90% white.

Also in the primary race are two army combat veterans, Josh Remillard of Mills River and Jay Carey of Hendersonville. A fifth candidate, Katie Dean of Asheville has created a campaign committee, though has not formally announced.

Meanwhile, Wendy Nevarez, a Navy veteran, is Cawthorn’s first official Republican primary challenger, though there will likely be more announcing their candidacies in the coming months.

“It seems like every week there’s a new one,” Mike Bitzer, a professor at Catawba College, tells Citizen Times. “I think in this case, we have a controversial incumbent who generates a great deal of polarization, especially on the opposition side.”

Since January, Cawthorn has been the subject of a damning Buzzfeed report in which more than 30 of his former friends, classmates, and acquaintances accused him of sexual harassment other inappropriate behavior, as well as a Washington Post article that revealed that he lied about that 2014 car crash that left him partially paralyzed.

According to OpenSecrets.org, Cawthorn, who voted to overturn the 2020 presidential election results, has raked in $1 million in campaign contributions so far this year. That’s a lot of money. And with this many challengers this far out from the election, he’s going to need every last penny.