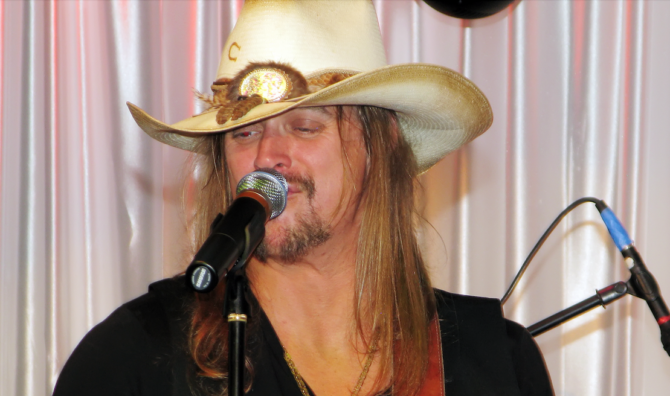 Noted MAGA mouthpiece and—apparently—”Trump’s favorite author” (not the ringing endorsement he thinks it is) Nick Adams has repeatedly taken to Twitter to sing the praises of country-rap croaker Kid Rock. How and why this obsession started remains unclear, but the dude’s incessant stan-dom is single-handedly starting to rival Nicki Minaj’s Barbz and the BTS A.R.M.Y. combined.

We’ve been here before. Back in February, Adams suggested Kid Rock would’ve made for a better Super Bowl halftime show than Dr. Dre, Snoop Dogg, Mary J. Blige, Eminem, Kendrick Lamar, and 50 Cent. He dismissed them as “hoodlums,” and the internet swiftly let him have it.

Now, the political commentator’s latest pro-Kid Rock Twitter storm was spurred on by the announcement of Taylor Swift’s upcoming 10th album, Midnights. It seems Adams has had enough of her folklore, and so he’s decided a musician more in line with conservative values should release an album the same day to challenge Swift’s chart-topping crown.

The best he could come up with? Kid Rock, the disgraced musician who hasn’t been relevant in nearly a decade—and that’s being generous.

Shouting to no one in particular, Adams has spent the better part of this week praising Kid Rock, firing off a number of tweets, each more delusional than the last. Let’s break them all down, one by one.

Kid Rock should release a new album the same day as Taylor Swift.

People are craving real music with thought-provoking and emotional lyrics. Who better to give it to them than Kid Rock?

I GUARANTEE his album would outsell and outclass hers!

The first of Adams’ musical musings this week sees the conservative pundit hatching his diabolical plan to take over the radio waves: By having Kid Rock release an album on October 21, the same day as Swift’s Midnights.

Yes, Nick, who better to give us “thought-provoking and emotional lyrics” than the man whose breakthrough single contained such transcendent lyrics as, “Bawitdaba, da bang, da dang diggy diggy Diggy, said the boogie, said up jump the boogie.” I could barely type that without breaking into tears—I was so moved. *eyeroll*

And how can Adams be so certain that Kid Rock would sell more than Swift? Every single album of hers (including the re-recordings) has hit number one on the charts since her sophomore effort, Fearless, in 2008. Kid Rock’s latest album—launched to little acclaim in March 2022—ranked at 124th in album sales. Yeesh.

Taylor Swift wants to be a democrat because she wants to be in movies….period. And it looks like she will suck the door knob off Hollyweird to get there. Oldest move in the book. Good luck girl.

Proving the depths of his fandom, Adams took the liberty to search through the Kid Rock archives, retweeting this from three years ago where the musician tried to shade Taylor Swift. The tweet’s not even worth getting into, but come on, “Hollyweird”? What self-respecting adult uses that term un-ironically?

The left can keep Tommy Lee, we have Kid Rock!

In a conversation with himself, Adams followed that up the next morning with this gem. Tommy Lee? What does he have to do with anything? The rocker is busy posting his own nudes on social media; there’s just no need to drag him into this—their fight was over a decade ago.

Under Joe Biden, America is more divided than at any point in our history since the Civil War.

Oh, and now he’s worried about a divided America? You mean, the guy who’s so quick to draw party lines around every single musician, even Tommy Lee?

While we concede that music can, indeed, bring people together, Kid Rock is absolutely not the person to do it. The “Cowboy” singer has an abysmal track record of homophobia, trans-phobia, racism, etc, etc… he’s alienated just about everybody.

Related: Kid Rock brags to Tucker Carlson about using the word “f*ggot” and how he’s “uncancellable”

Kid Rock is an American bad ass alpha male and Taylor Swift is an American embarrassment and the world's largest polluter. I stand by every word! pic.twitter.com/s3tAoHDuCa

Not this. Adams was so in his feelings about his own invented “Kid Rock versus Taylor Swift” drama that he decided to post a whole video about it—a poorly lit, meandering one at that!

And, oh brother, now you suddenly care about the environment enough that you want to call Swift out for polluting?

Raise your children to be like Kid Rock and Kyle Rittenhouse, NOT Taylor Swift and Harry Styles!

This one is just new levels of deranged. Kyle Rittenhouse? Don’t get us started.

And let’s just say you’re better off keeping your kids away from Kid Rock. Need we remind you of the lyrics of his 2001 song “Cool, Daddy Cool”?: “Young ladies, young ladies, I like ’em underage see Some say that’s statutory (But I say it’s mandatory)” That’s a major yikes.

I'd rather listen to "All Summer Long" by Kid Rock over ANY of Taylor Swift's whiny songs about her ex-boyfriends! https://t.co/DIdZpUzUym

Then he re-shared his own video, snarking about Swift’s “whiny songs about her ex-boyfriends.” Blatant misogyny aside, Adams is ignoring the fact that Kid Rock likes to sing about his exes, too. His best and highest-charting hit (all credit to Sheryl Crow), “Picture,” is all about not being able to get over an ex, after all.

Kid Rock and Ted Nugent are the past, present, and future of music.

Taylor Swift is a depressing and whiny relic of the late 2000s and early 2010s.

Taylor Swift's legacy will never come close or compare to the legacy of Kid Rock and Nugent.

And lastly, for now, is this piece of work. Calling Swift a “relic of the late 2000s and early 2010s” in comparison to Kid Rock and Ted Nugent? Girl, this is delusion, period.

If Adams thinks these guys are the pinnacle of music, then we’d hate to see his Spotify Wrapped at the end of the year.