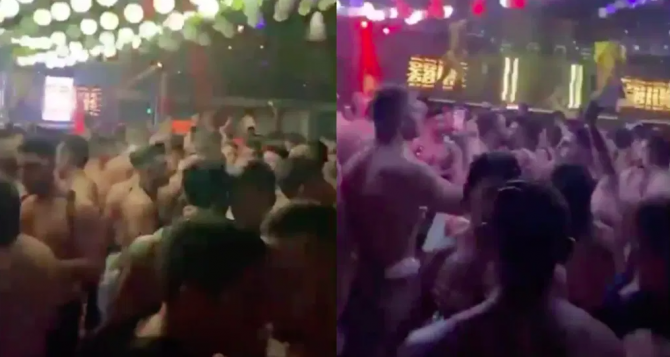 The Atlanta Pride organization is distancing itself from the string of unofficial circuit parties and other events that happened over the weekend which resulted in the drug death of one attendee.

The controversy started Saturday morning, when video taken inside a crowded gay bar the night before began circulating on Twitter, racking up nearly 1 million views.

Andy Herren, best known for winning Season 15 of Big Brother, shared the clip, tweeting: “Taken last night at Atlanta Pride. And publicly posted to Instagram. In the middle of a pandemic. People can be so sh*tty and selfish. Please don’t be like these people. This is appallingly gross.”

Taken last night at Atlanta Pride. And publicly posted to Instagram. In the middle of a pandemic. People can be so shitty and selfish. Please don’t be like these people. This is appallingly gross. pic.twitter.com/SDafZ0HXfC

This doesn’t represent Queer Atlanta or Atlanta Pride… this is some selfish bullshit and greedy promoters who want to cash in on the weekend and a slap in the face to our spaces that are actually doing the work or have been forced to shut down. pic.twitter.com/09dcogipZm

Night 2. They are still at it. pic.twitter.com/nZYq3mj07C

In response, Atlanta Pride put out a statement Saturday afternoon saying any in-person events were not sanctioned by the organization and noting that all of its official events were being held virtually.

“We’d like to make clear that ALL our events during Atlanta Pride are virtual,” the organization tweeted. “We’ve seen videos of large parties; those are not official Atlanta Pride events. Stay home and safe!”

Hi APC family. We'd like to make clear that ALL our events during Atlanta Pride are virtual. We've seen videos of large parties; those are not official Atlanta Pride events. Stay home and safe! pic.twitter.com/VU9hcdgcuh

Sadly, the circuit party videos were only a prelude of even worse things to come. Because on Sunday, a man died while attending another unofficial Pride party held at the popular gay bar BJ Roosters.

Atlanta police say the man lost consciousness around 6:30 a.m. on Sunday morning. EMTs arrived about thirty minutes later, but they were unable to revive him. He passed away in the bar’s basement and was pronounced dead shortly after 8:00 a.m.

The man has not been identified, but witnesses say he appeared to be healthy and in his mid to late 30s. According to his partner, he had taken ecstasy earlier in the night. Police say that there do not appear to be any signs of foul play, though an investigation is still ongoing.

The circuit party was hosted by Ga Boy Events, which organized numerous parties held over the weekend. At least one attendee claims pandemic guidelines were not enforced at any of the events, describing the clubs as “packed” and “overcapacity at times.”

Neither Ga Boy Events nor BJ Roosters have issued any comment on the tragic incident.

Related: WATCH: Twitter is freaking out over this NYC circuit party in the COVID-19 epicenter

Elvira teams up with the gays for free Halloween virtual screenings

What’s next for the Tiger King kingpin, this Trump-loving drag queen and Boxers NYC?

At least 7 hospitalized after disastrous Trump rally in Omaha