Georgia GOP Rep. Marjorie Taylor Greene took a break yesterday from tweeting her outrage over the FBI’s raid of Mar-a-Lago to share her preferred pronouns.

Yes, more than a year after Rep. Lauren Boebert made a similar “joke” about pronouns (“My pronoun is ‘patriot’,” tweeted the Colorado Rep. in 2021), Greene decided to flog the same pun. 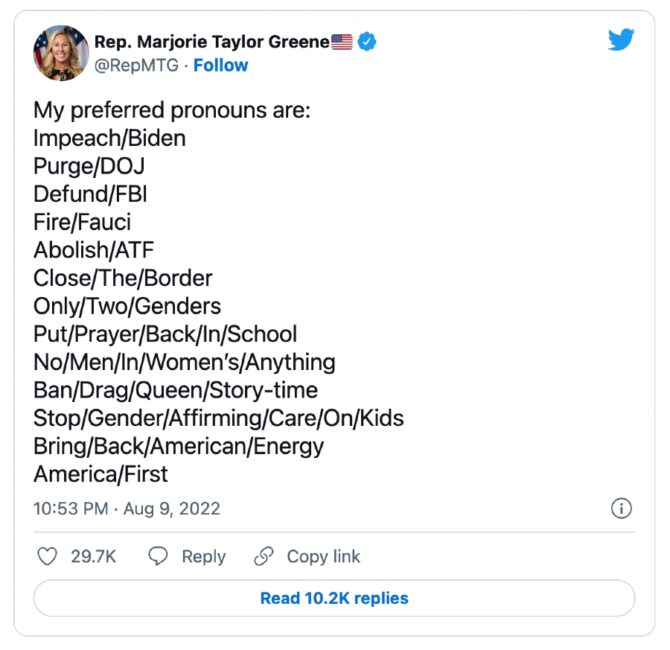 The tweet has had almost 30k likes and over 10k responses at the time of writing. Most wanted to inform Greene she does not understand the meaning of pronouns.

When someone starts a post about their preferred pronouns, the reader might actually expect to see pronouns. Just saying.

As a PhD in linguistics I regret to inform you that none of those words is a pronoun. Verbs, nouns, articles, adjectives, prepositions, a quantifier, but no pronouns.

Many others offered their own alternatives for Greene.

Your preferred pronouns will be inmate #543795. pic.twitter.com/Blu2d5uZSx

I thought these were your pronouns, Marjorie:

Related: This may be Marjorie Taylor Greene’s dumbest tweet yet, and that’s saying something

Others just remarked on her unoriginality.

girl you are running this joke into the ground pic.twitter.com/NGYLCCXDwx