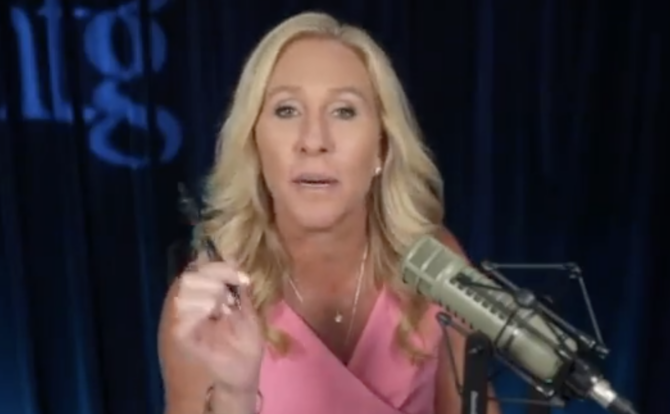 Marjorie Taylor Greene has gay sex on the brain.

In a now-viral clip from her webcast, MTG: Live, Greene audaciously hawks her new monkeypox T-shirt before saying, “Monkeypox is all the rage, it is the hottest thing going in Washington, D.C. right now.”

She continues: “You are not supposed to talk about how it really gets spread around but we are going to just go ahead and let you know.

Just for contrast, here’s how Dr. Anthony Fauci spoke about the outbreak, which is currently concentrated among men who have sex with men, earlier this week:

We need to get our arms around understanding just the extent of the spread, how it’s spread, what population.

Right now it’s focused — because it’s about 99% among men who have sex with men. We’ve got to understand the modality of transmission, the manifestations, also the risk for people like children and pregnant women. So we’ve got to reach out to the community, particularly men who have sex with men, get rid of anything that even smacks a little bit of stigma, and make sure we outreach to them.

According to the World Health Organization, “monkeypox is transmitted to humans through close contact with an infected person or animal, or with material contaminated with the virus.”

“Monkeypox virus is transmitted from one person to another by close contact with lesions, body fluids, respiratory droplets and contaminated materials such as bedding.”

Part of the WHO’s strategy to curb the outbreak includes a recommendation that men who have sex with men “[reduce] your number of sexual partners, [reconsider] sex with new partners, and [exchange] contact details with any new partners to enable follow-up if needed.”