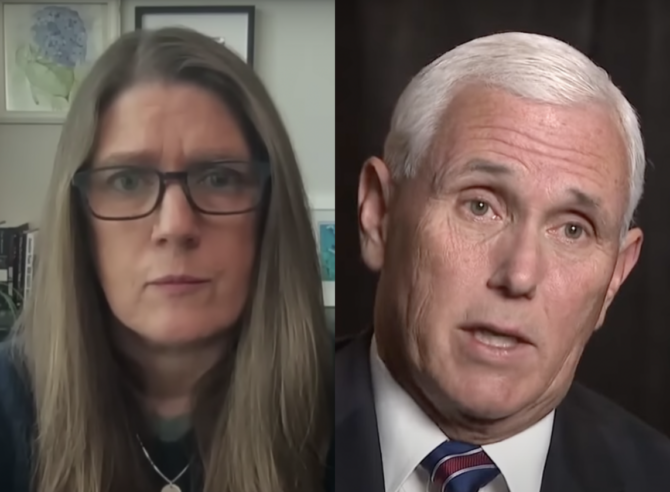 “Thanks in part to Mike Pence, our democracy withstood Donald Trump’s scheme and the violence of January 6,” said Democratic Rep. Bennie Thompson, who chairs the committee.

“Vice President Pence understood his oath of office was more important than his loyalty to President Trump. He did his duty,” added Republican Rep. Liz Cheney, the committee’s vice chair.

One person who isn’t giving into the “Mike Pence is a hero!” storyline, however, is Mary Trump.

“Mike Pence is not a hero. He did the right thing on January 6th but only after exploring every way to avoid doing so. He doesn’t even have the guts to testify in front of the committee,” she tweeted last night.

Mike Pence is not a hero. He did the right thing on January 6th but only after exploring every way to avoid doing so. He doesn't even have the guts to testify in front of the committee. #January6thCommitteeHearings

During yesterday’s hearing, the committee focused on the pressure Trump and others placed on Pence to block the certification of Joe Biden’s election victory, and how the ex-VP ultimately stood firm and didn’t give in. (Although not before consulting his own team of lawyers.)

In addition to the lawmakers, several witnesses praised him for his bravery and having averted a constitutional crisis.

Greg Jacob, a counsel to Pence, testified that he and the ex-VP talked in early December 2020 about how the founding fathers didn’t intend to empower the vice president, or any one person for that matter, to change the election results.

And Marc Short, Pence’s former chief of staff, said the ex-VP told Trump “many times” prior to the insurrection that he didn’t agree with the idea.

And, sure, that’s good. But Mary Trump is right. Mike Pence isn’t a hero for simply doing his job on January 6, 2020. And the fact that he’s shown zero interest in participating in the inquiry into the failed coup in which his very life was threatened is, frankly, kinda weird.

Others seem to agree…

I pay taxes, stop at stop signs. Am I a hero?

I agree with Officer Dunn’s question…”How did we get to this point where doing the right thing is considered courageous?”https://t.co/OcO5D1iuJm

He had two months to expose the truth, the plan and stop an insurrection. And he had four years to expose Trump (sorry Mary) to the country / world and did not. His own political ambition and fear keeps him from testifying.

He would have been a hero if he would have started 25th amendment procedures in November.

Yeah screw that shit. He did his job…how courageous 🙄

Remember Pence did call Dan Quayle asking if there was any way he could do what tRump wanted!!!

So many lives could have been saved, as well as a country on the brink of fascism, if all these supposed legal minds had done the right thing and exposed the coup plans before Jan. 6.

He basically did the minimum of what was required of his position. Calling him a hero is like giving an award to a cop for not being corrupt.

A hero does not spent years setting your house on fire only to run away at the last minute.

Yes. We’ve grown so accustomed to grift that someone simply doing the duty each of their predecessors has done after having sworn an oath to do so is acclaimed as a hero’s journey.