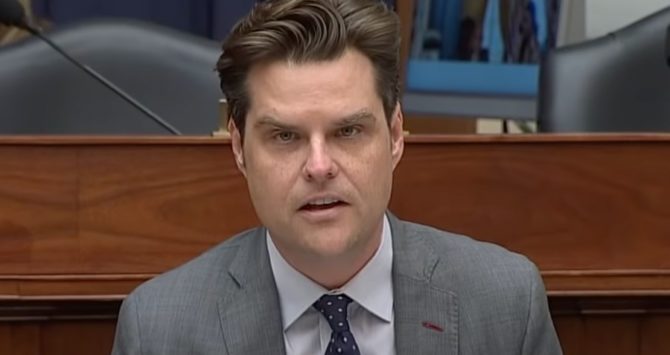 So Rep. Matt Gaetz got married over the weekend.

The antigay congressman from Florida married his fiancée, Ginger Luckey, on Catalina Island in California on Saturday afternoon. Vanity Fair described the wedding as a “quiet ceremony” with about 30 guests that was officiated by one of Rand Paul’s aides.

The day before they couple exchanged vows, Gaetz took a photo of himself on an airplane staring maniacally into the camera with his soon-to-be-bride passed out beside him. His eyes are glossy and bloodshot and she’s unconscious with her head back and her mouth hanging open.

“So blessed to be with the beautiful ⁦@LuckeyGinger,” the 38-year-old lawmaker tweeted.

Now, generally speaking, most people would consider taking a photo of a person while they’re sleeping and then sharing it with your 1 million followers on Twitter without their consent to be impolite at best and deeply creepy at worst.

Related: Matt Gaetz’s future sister-in-law slams him on TikTok, says there’s “so much more to the story”

It becomes even creepier when you’re pushing 40 and you’ve been accused of paying numerous women to do illegal drugs and have sex with you and you’re currently under federal investigation for allegedly sleeping with a high school student and obstructing justice.

Clearly, Gaetz thought his sleeping bride photo was hilarious. The rest of the internet, however, did not. Here’s what they’re saying…

A prime example of not understanding consent

I would literally break up with you over posting this photo.

Nice to show the world how much you respect your girlfriend’s privacy. How creepy is that? Anything for a laugh, eh Matt?

You look high AF, and this image appears to be taken mid abduction. Also, where the eff is her mask?

Didn’t Al Franken resign for something similar to this?

That is an inappropriate photo to post especially when you are a Congress person. It shows lack of respect. Why would anyone do that to their fiancé?

Frankly, no surprise there.

Bill Cosby didn’t even take photos of his victims.