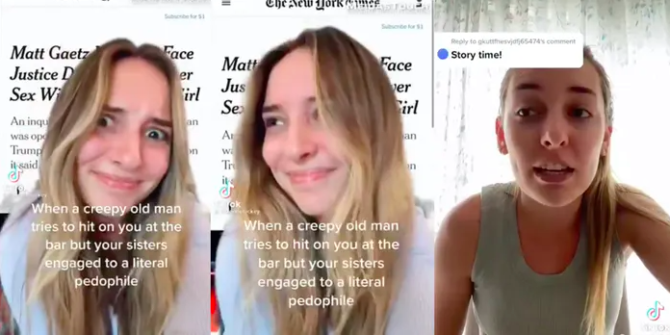 Matt Gaetz’s soon-to-be-sister-in-law wants the world to know that she thinks her future brother-in-law is “weird,” “creepy,” a “narcissist,” a “master manipulator,” a “literal pedophile,” and an “ephebophile,” which is someone who is primarily attracted to adolescents.

Roxanne Luckey, the sister of Gaetz’s 26-year-old fiancée, Ginger Luckey, posted three separate videos to her TikTok channel this week in which she rips into the antigay lawmaker for his treatment of women and says she was “not surprised” when she first learned he was under federal investigation for alleged teen sex crimes.

“I saw the character and type of person he is,” the 20-year-old said in one video, “and when everything came out about him, I honestly, unfortunately, was not surprised.”

Roxanne, who briefly worked as a White House intern in 2020, also talked about experiences she’s had with “creepy old politician men.”

“As someone who has personally experienced a ton of creepy old politician men hitting on me when I was underage, and experiencing sexual assault at that age by people of power, it’s very disheartening and I have zero tolerance of people like [Gaetz].”

She added that she’s “tired of them getting away with this type of stuff.” Then she offered this very cryptic soundbite: “There is so much more to the story and about what I know about Matt Gaetz. It is definitely a serious situation.”

She also shared a story about a time when Gaetz allegedly tried setting her up with a friend of his, who was much older than her, divorced, and had a kid.

According to Roxanne, she was 19 at the time and the “creepy” guy wouldn’t quit hitting on her, even after she told him she had a boyfriend. When she later confronted Gaetz about it, she says he tried to gaslight her.

“He just immediately got so defensive and started yelling at me and my mom,” she recalled. “He called me a narcissist, just was a thousand percent gaslighting me—went full lawyer, ‘I don’t have to listen to you, I don’t have to answer your questions.’”

She added, “Someone who is innocent shouldn’t be getting so defensive, and literally being a grown man and yelling at a 20-year-old girl is just beyond me.”

Shortly after Roxanne posted the videos, Ginger Luckey lashed out, telling The Daily Beast that her baby sister is sick and has a history of “destructive behavior,” which is ironic given that she herself is engaged to one of the most toxic men on Capitol Hill.

“Matt and I are enjoying our engagement and are deeply in love,” Ginger said. “My estranged sister is mentally unwell.”

But The Daily Beast notes that the two sisters can’t be that estranged since a video posted by Roxanne last November shows the two of them plus Gaetz having fun together. (The video has since been made private.)

“She has been in therapy for years and our family hopes that after receiving in-patient mental health treatment, she will overcome the tendency she has repeatedly shown to engage in destructive behavior,” Ginger said.

As for Gaetz, he hasn’t commented on his future sister-in-law’s remarks. But it looks like there are going to be some pretty awkward family gatherings ahead.