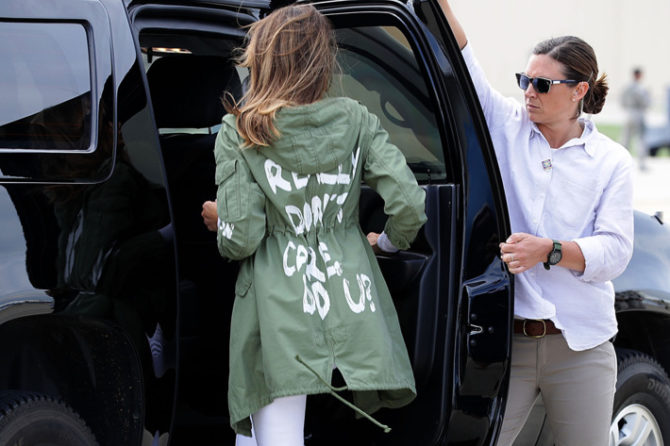 According to Stephanie Grisham, Melania was so disinterested in the 2020 election that she didn’t even stay up to watch the results on television, despite the fact that it was a very close, very contentious race and, oh yeah, she was the First Lady of the United States of America.

In I’ll Take Your Questions Now: What I Saw in The Trump White House, she claims the ex-FLOTUS spent most of the night asleep in her bedroom rather than by her husband’s side.

“I knocked a few times, quietly at first, but louder at each attempt,” she writes. “I finally opened the bedroom door only to find that Melania Trump was sound asleep.”

According to Stephanie Grisham's forthcoming book, we should have taken Melania's jacket seriously….she really doesn't care.

Grisham says Melania was exhausted after a late night the day before, followed by waking up early the next morning to vote in Florida, and then flying back to Washington, D.C. later that afternoon.

“I knew by now how much sleep meant to her,” she writes, “but still, I couldn’t imagine being asleep at a time like that. Maybe she thought that someone would wake her up if Trump won.”

Except Trump didn’t win. Melania did eventually rise from her slumber to join her husband in the East Room around 2:30 a.m., according to Grisham.

A reminder that there's absolutely no reason to shell out $28.99 to purchase Stephanie Grisham's tell-all when anything worth knowing will show up on Twitter dot com for free

Later, Grisham says Melania became convinced “something bad happened” and that the election had been rigged. Grisham also claims she tried to explain that there was no conspiracy to oust her husband from office, but Mrs. Trump refused to believe her.

Last weekend, Melania’s camp issued a statement about the book, accusing Grisham of being bad at her job, disloyal, unprofessional, and greedy. It read:

The intent behind this book is obvious. It is an attempt to redeem herself after a poor performance as press secretary, failed personal relationships, and unprofessional behavior in the White House. Through mistruth and betrayal, she seeks to gain relevance and money at the expense of Mrs. Trump.

Politico notes that Melania’s mention of “failed personal relationships” is likely a jab at Grisham’s romantic relationship with former Trump aide Max Miller, which allegedly  “ended when he pushed her against a wall and slapped her in the face in his Washington apartment after she accused him of cheating on her.” Miller has denied the accusations.

Grisham’s book is scheduled to be released on October 5.