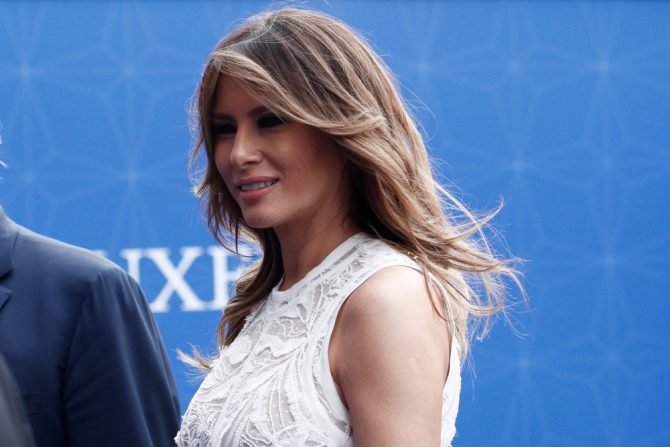 It seems like every day, new details from former White House press secretary Stephanie Grisham’s forthcoming book, I’ll Take Your Questions Now, are released. The latest bit of gossip once again involves Melania Trump and her usual habits, as well as the petty lengths she would go to get revenge on her husband for embarrassing her.

According to Grisham, the Secret Service nicknamed the ex-FLOTUS “Rapunzel” because she hardly ever left “her tower, a.k.a the White House residence.” She also believed in self-care so much that immediately upon boarding Air Force One she would change into a robe and slippers so she could be more comfortable.

Grisham also claims that, during her time as First Lady, the former model spent most days cooped up indoors with her son, Barron, and her parents while she worked on her scrapbooks and photo albums, which she loved so much she considered them her children.

“Deep into the pandemic, she spent two hours recreating the ribbon-cutting for the White House tennis pavilion because she hadn’t gotten the right shot weeks earlier,” she writes. “She was working on a photo shoot of a rug during the Capitol riot.”

Oh, and remember that “I Really Don’t Care, Do U?” jacket Melania wore while traveling to visit migrant children at the Texas-Mexico border? Grisham devotes an entire chapter just to that.

She writes that Melania was genuinely bothered by her husband’s family separation policy and wanted to see for herself what was happening down at the border, but “for reasons that still remain a mystery, she’d ordered the $39 Zara jacket online.”

It wasn’t until after the photos went viral that the White House cooked up the ridiculous story about how she wore the jacket to troll the “Fake News Media.” That explanation, Grisham claims, was just last minute damage control.

Oh, and speaking of the “Fake News Media,” when news broke of Trump’s alleged affair with Stormy Daniels, Grisham says Melania became “unleashed” and started looking for ways to embarrass him in public by doing things like refusing to hold his hand or swatting him away if he tried reaching for her.

According to Grisham, Melania would also surround herself with the most handsome military aides, which she hand-selected, to make Trump jealous. She said she needed their help getting around because the floors inside the Capitol were “too slippery.”

Related: The way Ivanka tried to unsuccessfully elbow a meeting with Queen Elizabeth is peak Ivanka

In a statement, Trump’s latest spokesperson, Liz Harrington, called Grisham’s book “another pitiful attempt to cash in on the President’s strength and sell lies about the Trump family.”