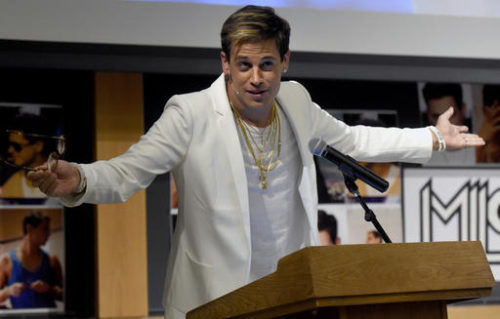 Milo Yiannopoulos has become increasingly poor after a series of high-profile failures. Though he has unsuccessfully tried to book speaking gigs and tours several times over, they’ve all crashed and burned — poor baby. It turns out that not even Germany’s far-right racist political party, Alternative for Germany (AfD), wants to hear from him either.

Alternative for Germany’s foremost political stance is that Germany should cast off its Holocaust-shame. (Oh, that old thing?). AfD also wants to cut off all immigrants and refugees (especially Muslims) lest they dilute Germany’s identity, and it opposes same-sex unions and feminism as a threat to family values. AfD also thinks climate change is a myth. So they’re basically the sort of people Yiannopoulos loves spending time with — right, Chadwick Moore?

AfD had invited Yiannopoulos to speak to them and other elected officials on a panel about blogging held at the German Parliament. But then guess what? AfD disinvited him for seemingly no reason.

Perhaps AfD didn’t think he’d have much to say seeing as he’s been banned from Twitter, Facebook and Instagram — what social media platform would he even talk about? The far-right cess-puddle of Gab?

Maybe the AfD caught wind of Yiannopoulos’ comments supporting child rape. (Pedophilia isn’t such a great look, even on Islamaphobes).

But this is just the latest of Yiannopoulos’ failed attempts to launch an attention-grabby, money-making tour. He tried and failed thrice over to join a right-wing speaking tour through Australia before the country just banned him. Conservative organizers in Oklahoma recently cancelled his speaking gigs in that red state as well.

So Yiannopoulos will have to kiss his German trip goodbye and think up ways to make money, especially since he’s more than nearly $2 million in debt due to wedding and legal costs. Perhaps he can go back to selling useless nutritional supplements on Info Wars. We’d suggest raising some money on the crowdfuncing site Patreon, except they banned him too.