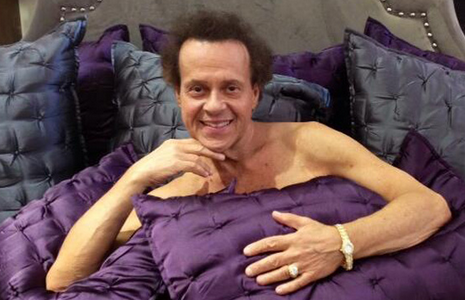 There has been a lot of mystery surrounding Richard Simmons as of late.

Rumors that the fitness guru was being held against his will, possibly by his live-in maid, inside his Beverly Hills mansion began circulating way back in January 2015. Then last year, there were whispers he was transitioning into a woman.

But nobody knows for sure.

Last month, the podcast Missing Richard Simmons debuted on iTunes. The weekly program was created by one of Simmons’ former students, Dan Taberski, and examines the 68-year-old the Sweatin’ to the Oldies star’s sudden disappearance from the public eye nearly three years ago.

“I thought it was just me and then I learned he wasn’t returning anyone’s calls and he taught his last class in February 2014,” Taberski tells People. “That’s what this podcast is about and what became of him. I was interested in him before he disappeared and this just magnified it.”

The first podcast, “Where’s Richard?,” premiered on February 15. Since then, the program has published a total of four episodes and just hit the #1 top podcast on iTunes.

Simmons’ rep, Tom Estey, insists the rumors surrounding Simmons’ withdrawal from public life are much ado about nothing, telling People last June, “He has decided to live quietly the last few years. He had knee surgery a few years ago and has a bum knee. He is still on Twitter and Facebook and works behind the scenes continuing to inspire and motivate people to lose weight. When he decides to come back, he will come back.”

Related: WATCH: Richard Simmons Has Never Been This Excited About Tuna Before

Marie Garofalo, another former student, says she watched Simmons dramatically change during the three years she attended his classes.

“When I first started going it was amazing,” she recently said. “He was motivational, he had this AOL email address that he gave to people. I remember emailing him once and he got back to me within a day.”

Garofalo said in the beginning Simmons was “so invested in people” and that he  “really seemed to care.” But as time wore on he began to “deteriorate.”

“It would be a whole big deal for him to come in, and he would take like 20 minutes to change and get ready,” Garofalo explained. “So there was that part of it. Then he would be doing the cool down and would just burst out crying.”

Taberski says he’s committed to getting to the bottom of why Simmons “cut himself off from the world.”

“We haven’t made contact with him and a big part of the process it to reach out to Richard and let him now that he’s loved,” Taberski says. “I think he’s important and I just want to talk to him and find out he’s okay and maybe understand a little bit about what’s going on in his head and what happened to him.”