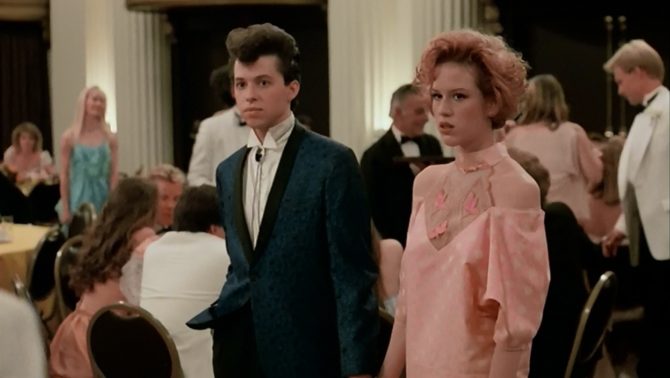 Ringwald starred in a string of hits for director/writer John Hughes in the 1980s, the last of which being Pretty in Pink in 1986. Howard Deutch (Zoey Deutch’s dad, for anyone keeping track) directed the film from a script by Hughes. The plot saw Ringwald’s character Andie torn between two men: the affluent Blane (Andrew McCarthy) and her dorky best friend Duckie (Jon Cryer). The original ending of the film had Andie choosing a relationship with Duckie, though test audiences–and Ringwald–revolted. Now Ringwald shares her theory as to why.

“Duckie doesn’t know he’s gay,” Ringwald said, according to The Huffington Post. “I think he loves Andie in the way that [my gay best friend] always loved me. That ending fell so flat — it bombed at all the screenings. I didn’t realize it then — I just knew that my character shouldn’t end up with him because we didn’t have that sort of chemistry. If John was here now, and I could talk to him, I think that he would completely acknowledge that.”

Ringwald also added that if Pretty in Pink was made today, Duckie would totally end up with a handsome guy at the end.

On the other hand, actor Jon Cryer, who played Duckie, disagrees.

“Yes, she said that the guy whom Duckie was based on was gay. It’s a different thing. Let’s be clear here,” Cryer told Zap2it. “No, she actually said that if one projected beyond the movie, that Duckie would be out by now. And I respectfully disagree.”

“I want to stand up for all the slightly effeminate dorks that are actually heterosexual,” Cryer added. “Just cause the gaydar is going off, doesn’t mean your instruments aren’t faulty. I’ve had to live with that, and that’s okay.”

Cryer does have a point, and we speak from experience. On the other hand, given the way that the subtle, homophobic humor in the work of John Hughes hasn’t exactly aged well, a gay Duckie would provide a nice counterbalance. Let’s all keep that in mind for a potential long-delayed sequel: Still Pretty in Pink.